A Dying Man’s Lost Recipe Made His Daughter a Multimillionaire

When Hiroe Tanaka’s father died, he left behind something that would change her life: a recipe for fried meat on a stick. It was an act of love. His daughter adored the Japanese street food known as kushikatsu, and he’d spent endless hours working out how to make it just right. The handwritten memo, which…”
Editor
Agriculture Economy Entertainment 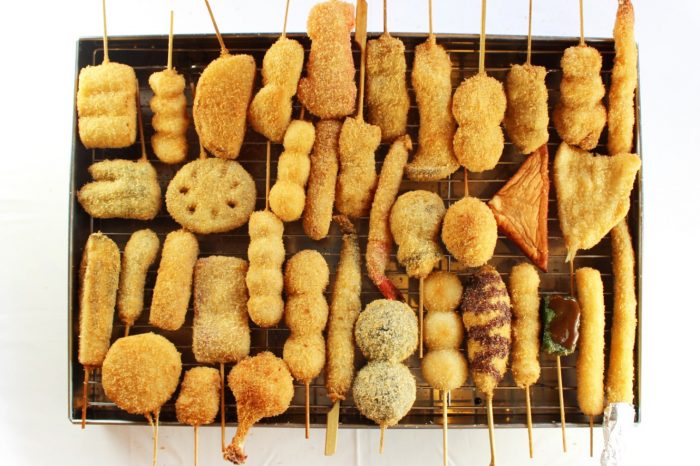 When Hiroe Tanaka’s father died, he left behind something that would change her life: a recipe for fried meat on a stick. It was an act of love. His daughter adored the Japanese street food known as kushikatsu, and he’d spent endless hours working out how to make it just right.

The handwritten memo, which detailed how to cook the seemingly simple dish, helped save a restaurant business from bankruptcy in 2008, elevated Tanaka from part-time employee to vice president of a company named after her, and made her a multimillionaire. The university dropout who once worked as an office lady now sets strategy for the $82 million Kushikatsu Tanaka.

“I pay tribute to my father every day,” Tanaka, 46, says in an interview. “It all happened because of the recipe.”

Kushikatsu Tanaka started trading in September after a popular initial public offering priced at the top of its indicative range. The shares, which are listed in Japan’s Mothers market for smaller firms, gained more than 50 percent through the end of last week. They rose 0.3 percent on Monday.

The chain has come a long way since it opened its first restaurant in Tokyo in December 2008, where Tanaka and Keiji Nuki, the company president, used second-hand kitchen equipment to keep costs down. Kushikatsu Tanaka now has 146 branches across Japan and one in Hawaii. It plans to open 40 more this year.

The pace of expansion is one of the fastest in Japan’s cut-throat restaurant world. And while that’s partly due to the company’s strategy of bringing the business model employed by 100 yen discount stores to the food industry, offering dishes at their cheapest possible prices, it’s also, Tanaka says, very much down to her dad.

Kushikatsu, a dish made by battering skewered meat and vegetables, deep-frying them and then dipping them in sauce, is common on the streets of Osaka, in the west of Japan’s main island, where Tanaka grew up. It’s less known in other parts of the country. The food originated as a quick, filling meal for laborers.

On special occasions when Tanaka was a child, whenever someone asked her what food she wanted to eat, she’d always say kushikatsu. Her father, she says, realized what others didn’t: that cooking it is an art. The oil, batter and sauce all have to be just right. For years he used his downtime from working as a real estate agent to perfect kushikatsu for her, she says.

Then, when Tanaka was 21, her dad passed away.

As Tanaka went on with her life, doing administrative work at an advertising agency after deciding not to finish a university degree in literature, she tried without success to replicate her father’s kushikatsu. In the late 1990s, she took a job with Nuki, who was running a bar in Osaka at the time, because she wanted to focus on cooking. One of the dishes she constantly tried to make was kushikatsu.

When Nuki, also 46, expanded into Tokyo a couple of years later, Tanaka moved to the capital to work at a high-end restaurant he opened. Again, Nuki let her try to cook kushikatsu, although he didn’t share her passion for the food.

But she couldn’t get it right, even with the help of professionals. After several years, she started to think her father’s kushikatsu would die with him.

At that point, things got worse.

When the global financial crisis hit in 2008, it decimated the customers willing to splash out at Nuki’s restaurants. He told Tanaka the game was up: he was closing down and it was time to go home.

Tanaka wasn’t willing to quit. She even offered to borrow money for the business under her own name. But she accepted it was time to take a step back, and started to pack.

That’s when she found it. It was in a box of memos and mementos from her dad. He’d left her the secret of his kushikatsu after all.

Neither Tanaka nor Nuki had any expectations for the scrawled instructions, which had been corrected over and over. “The discovery wasn’t dramatic at all,” Nuki recalls. “It’s not like the memo had ‘success guaranteed’ written on it.”

But they tried it and it worked. “It was, indeed, the taste of the kushikatsu my father used to cook,” Tanaka says.

Kushikatsu Tanaka restaurant in Tokyo.Photographer: Akio Kon/Bloomberg
He found a small property in a quiet residential area outside central Tokyo, where rent was cheaper. He filled the kitchen with instruments from his old places, and whatever was missing he bought using an auction website. “A lot of people told me not to do it, that the place wouldn’t attract people because there weren’t any other shops nearby,” he says.

But the Tanaka kushikatsu went viral.

People were lined up to get in even at 1 a.m. Nuki had to set up extra tables outside. The number of bicycles parked outside the shop drew complaints from neighbors. Passengers on buses stared with curiosity at the long lines.

Nuki and Tanaka added a second and third store. They all bustled with customers. When a rival kushikatsu joint opened in the trendy Shibuya area of Tokyo, the two decided it was time to turn their business into a franchise.

“At first, I didn’t like the idea of having others involved,” Tanaka said. But “what I hated most was having people in Tokyo try kushikatsu made by copycats and come away with a negative image that it tastes bad,” she says.

Kushikatsu Tanaka reported 316 million yen ($2.9 million) in operating profit for the year ended November, a 57 percent increase from the previous 12 months. The stock has caught the attention of industry analysts, with three brokerages initiating coverage this year. One says buy and two recommend holding.

Ryotaro Sawada, an analyst at Ace Securities Co. who has a neutral rating on the shares, sounds a note of caution. “The company is targeting 40 stores this year, but investors should be aware of the odds of the number falling short of that goal given the competition,” Sawada wrote in a note to clients earlier this year.

Kushikatsu Tanaka traded at 31 times earnings at Friday’s close, versus an average of 26 times for 194 firms in the Topix Retail Trade Index. Analysts expect the stock to rise 17 percent over the next 12 months.

Tanaka, once one of Japan’s forgotten legion of part-timers, owns 4 percent of the company, a shareholding that’s now worth more than $3 million. In some ways, it’s her father’s last gift. As for the recipe, she says only herself and Nuki have seen it since she found it, and it’s going to stay that way.

“Kushikatsu is life to me,” Tanaka says. “I don’t know what I would do without it.”