……Govt Pleads For Understanding By Shina Abubakar & Kehinde Ayantunji As doctors under the auspices of Nigeria Medical Doctor (NMA) declared one week warning strike on Monday morning, two patients in the female ward of the Ladoke Akintola University of Technology Teaching Hospital (LAUTECHTH) in Osogbo died on the spot as a result of lack…”
Editor
hero News Osun 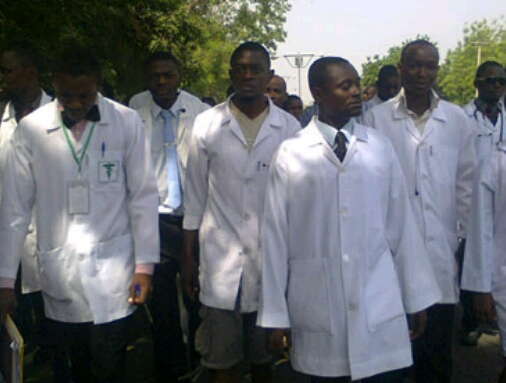 As doctors under the auspices of Nigeria Medical Doctor (NMA) declared one week warning strike on Monday morning, two patients in the female ward of the Ladoke Akintola University of Technology Teaching Hospital (LAUTECHTH) in Osogbo died on the spot as a result of lack of attention.

The deceased were in the hospital while the doctors down tools, which resulted in the casualties as the patients, who were on admission before the action, were no longer attended to, after which they died by the afternoon of Monday.

This is just as many patients during the week became stranded in the public hospitals across the state.

OSUN DEFENDER visit to LAUTECHTH, Osogbo and the State General Hospital Asubiaro, Osogbo indicated substantial compliance of the medical doctors with the NMA directive for the warning strike.

It was also gathered that casualties were also recorded at the male ward of the hospital as well as the emergency ward where other accident victims were ejected immediately the strike was announced.

Most of the patients on admission in LAUTECH were ejected while the Accident and Emergency Unit of the Hospital (A and E), that averagely accommodate 30 patients daily who are accident victims or requires emergency attention, was empty.

Investigations within the hospital complex revealed that other patients who required urgent attention were referred to other hospitals in other towns in the state.

Though, our reporter was denied access to the Intensive Care Unit of the Hospital (ICU) that caters for the patients who are on life support, but a staff of the unit confirmed that all the patients in the unit have been referred to the Obafemi Awolowo University Teaching Hospital, Ile- Ife.

Patients who are on clinical appointment on Tuesday and Wednesday were seen roaming around the hospitals without any doctor to attend to them.  Nurses and other medical workers on duty were however carrying out routing checks such as blood pressure, weight and other preliminary exanimations.

However, some of the patients refused to move out from the hospital for not having the necessary financial requirement to start registration afresh, hence, their decision to stay put through the week.

An Octogenarian,  Pa Adereti Gbotemi  who had an appointment for Tuesday regretted the strike, calling on the doctors and the government to resolve the industrial dispute in the general interest of the public.

Gbotemi said, “I came from Ora, Ifedayo Local Government  this morning for an appointment, though I heard about the strike on the radio, but I didn’t know it will be total, I have completed my drugs for close to a week but no one to attend to me now, it is pathetic.”

The situation also remained similar at the Asubiaro General Hospital, as the strike also grounded services in all the departments expect the Maternity Ward where some doctors were sighted providing skeletal pregnancy delivery services.

A medical doctor on duty who spoke to our reporter on condition of anonymity said the directive of the NMA was actually complied with, but “We are just here to complete all the cases that we have been handling since Sunday night; we are referring any other patients to OAUTH and private hospitals.”

The State NMA Chairman in the state, Dr Tokunbo Olajumoke, had on Monday directed NMA members to embark on 7-day warning strike after an emergency general meeting of the association in Osogbo.

According to him, within that 7-day, there will not be any form of clinical activities in all the state-owned hospitals and no doctor is allowed to treat any patient for that seven days, saying the warning strike was to allow the state government to  engage the doctors in a dialogue to look into their demands.

The doctors embarked on strike as a result of their agitation that the Osun State Government should stop paying them Modulated Salary Structure, as agreed by the government and the Labour Unions due to economic crisis. Some other grievances of the doctors are non-payment of CONMES salary scale, over taxation and deduction, among others.

Attempt to speak with the Chairman of the NMA, Dr Olajumoke prove abortive as he claimed to be in the midst of a meeting.

For the one week that the strike will last, patients who need urgent attention would have to resort to visiting private hospitals irrespective of their financial ability to receive medical attention.

However, the State Commissioner for Health, Dr. Rafiu Isamotu, urged the striking medical doctors in the state to bear with the government and be considerate to the plight of the people, while their entitlement is being sorted out.

The appeal was made in a statement signed by the Commissioner, a copy of which was made available to journalists in the state.

“The government of Ogbeni Rauf Aregbesola does not like strike. We consider the welfare of our people important and we do take it seriously. We will do everything to improve on the welfare of the people. We appeal to our doctors to bear with us, reason with us and be considerate.

“We have laid our cards on the table; there are so many things the doctors are demanding for, two of those things bothered on payment of salaries in 2015 when they were on strike and Revised CONMES.

“We have held meeting with the NMA and other stakeholders. We have engaged them unofficially too. The government had been engaging the doctors since they gave 21 days ultimatum. We have told them what the government is doing and the two parties need to reach agreement”.