Our Reporter THERE appears to be division in Governor Adegboyega Oyetola-led IleriOluwa camp of the All Progressives Congress (APC) in the State of Osun, on the State Congress of the party coming up on October 16, 2021. OSUN DEFENDER gathered that the division is on the choice of chairmanship candidate to be presented for…”
Yusuf
featured hero Osun Politics 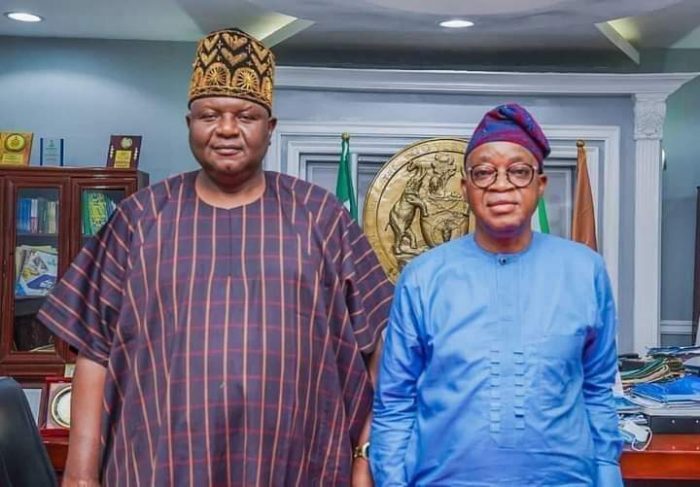 THERE appears to be division in Governor Adegboyega Oyetola-led IleriOluwa camp of the All Progressives Congress (APC) in the State of Osun, on the State Congress of the party coming up on October 16, 2021.

OSUN DEFENDER gathered that the division is on the choice of chairmanship candidate to be presented for the congress.

According to sources in the Government House, Oke-Fia, Osogbo, some kitchen cabinet members of Governor Oyetola were opposed to the return of Prince Adegboyega Famodun as the Chairman of the APC in Osun, while a few others want him to remain.

Famodun is currently the Caretaker Chairman in the state. The argument from the opposing camp is that it is politically safe for the Governor if Famodun did not return because of the fact that they are from the same State Constituency.

They also reportedly argued that if Famodun is not returned, it will calm the nerves of chieftains and members of the party, majority of who pitched their tent with The Osun Progressives (TOP).

It was gathered that the opposing camp have been mounting pressure on Oyetola to dissuade Famodun from contesting for the chairmanship of the party as a leverage for his second term ticket.

The medium authoritatively gathered that the opposing camp was scheming for Osun West to produce the APC Chairman, while the deputy governorship candidate in 2022 be zoned to Ile-Ife to honour Senator Iyiola Omisore and because of the bloc vote in the ancient city.

According to the sources, the opposing camp had been making case for Prof. Mojeed Alabi, a former Speaker of the State House of Assembly, to succeed Famodun.

The ‘Plan B’, according to the sources, is for the APC chairmanship to be zoned to Ile-Ife, if the Governor wants to run again with his deputy, Mr. Benedict Alabi.

To succeed Famodun in Ile-Ife, according to the calculation of the opposing camp, is Mr Tajudeen Lawal, the current Commissioner for Homes Affairs.

One of the sources who spoke with OSUN DEFENDER on Wednesday said: “The house (IleriOluwa camp) is not settled currently. My brother, politics is deeper than we thought. Everything is about interests, interests and interests.   I don’t believe that some people within the same group are working against Famodun’s return as the APC chairman.

“These people want the APC chairman to come from Osun West or Osun East. Their argument is that TOP will no longer have anything to complain about if Famodun is not returned. They said Prof. Mojeed Alabi from Ejigbo in Osun West or Hon. Tajudeen Lawal be made chairman. This life is funny.”

However, some other notable members of the IleriOluwa camp have insisted that there is no justification not to return Famodun as the APC Chairman.

They argued that any alteration to the current political positions in the IleriOluwa camp would be counterproductive and will definitely backfire.

One of Famodun’s supporters who spoke with OSUN DEFENDER under condition of anonymity said: “We thought TOP people are the only one that do not want the Chairman (Famodun) to return. It is now open that some people among us are also working against him.

“But for us, there is no reason for Prince Famodun not to return as Chairman of Osun APC. Nobody should scheme against him for fairness. We will let him down big time if we support another person. We are in this struggle together.

“Those scheming against him have ulterior motive. They want to take away the party structure from everybody totally. They want a new deputy governor too. That is not fair and it can’t fly.”

However, OSUN DEFENDER gathered that Governor Oyetola insisted that Famodun would be the APC Chairman, saying that it would amount to ‘use and dump’ if he did not support him.