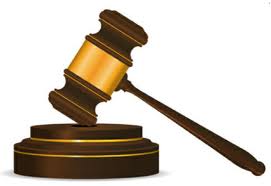 , Ismaeel Uthman
A  State High Court, sitting in Ile-Ife, Osun State, has sentenced two kidnappers, Mr. Ikenne Madu and Isaac Ndubisi to 34-year imprisonment.
The court presided over by Justice Adedotun Onibokun on Wednesday, convicted Madu and Ndubisi on kidnapping, stealing, illegal possession of firearms and conspiracy.
Justice Onibokun held that the prosecution, led by the Commissioner for Justice and Attorney General of the state, Dr Ajibola Basiru proved its case beyond reasonable doubt.
The accused were found guilty of kidnapping of Alhaji Tajudeen Popoola, a business man and Petrol Marketer in Moore, Ile-Ife at gun point.
According to the fact of the case, the kidnappers refused to release Popoola after collecting N10 million ransom.
Popoola luckily escaped from the kidnappers’ captivity and reported to the police which led to the arrest of the kidnappers.
The trial judge found that the case against the accused person was established by Popoola’s evidence which was corroborated by the evidence of his brother who handed over the ransom to the accused person and identified them as recipients.
Justice Onibokun maintained that the confessional statements made by the accused persons further corroborated Popoola’s evidence.
When asked for allocutus, Nmadu insisted that he did not know anything about the case and that he had been in prison since 2011, adding that his mum who was the only person that visited him died in an accident on the way from Anambra.
The 37 year-old man pleaded with the court to have mercy on him.
But Ajibola opposed Nmadu’s plea, saying that the court ought not be moved by appeal or sentiment by the accused persons.
The Attorney-General urged the court to give out maximum punishment to the accused persons because of the prevalence of kidnapping.
Ajibola stated that the accused persons were not remorseful by still insisting that they don’t know anything about the case notwithstanding the overwhelming evidence against them.
He urged the court to show mercy on the society at large by imposing maximum sentence on the accused.
Justice Onibokun upheld the submission of the Attorney General of the state and consequently sentenced the accused persons to seven years in prison for conspiracy, 10 years for kidnapping, seven years for stealing and 10 years for illegal possession of firearms.
The terms of imprisonment should run concurrently.

Student Raped By Boyfriend, 4 Others In Ondo