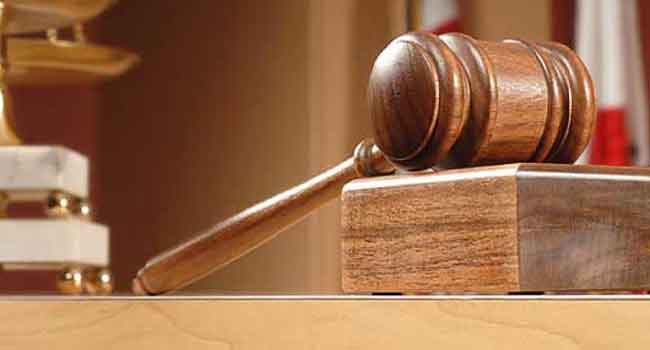 By Nofisat Marindoti
A Magistrate Court in Osogbo, State of Osun, has remanded seven persons in prison custody over alleged armed robbery and possession of firearms.
The accused persons included Olorunisomo Gbenga, 21, Dada Ayomide, 20, Yisa Mufutau, 23, Adeoti Saheed, 22, Rasheed Suleiman, 20, Kehinde, Olarewaju, 27 and Badmus Kayode, 21.
Prosecutor Mustapha Tajudeen informed the court that the accused persons committed the offence on December 31, 2017 at about 2:30am within Osogbo environment.
The prosecutor said the accused persons conspired to rob one Azeez Waheed, Adedeji Ridwan, Giwa Olalade, and Fagbemi Isaac of some valuable items.
He explained that the items include one  BlackBerry phone, an Android phone, a power bank, an infinix phone, Samsung mobile phone, Itel phone and ATM cards with cash sum of N25,000 among others.
He said the accused persons were armed with guns, cutlasses and other dangerous weapons.
Tajudeen further stated that the offence committed contravened Sections 1(1)(2)(a)(b) and 6(b) and punishable under Section 1(1) of the Robbery and Firearms (Special Provisions) Act cap R11 Vol.14 laws of the Federation of Nigeria 2004.
The plea of the accused persons who were facing six count-charge bothering on robbery, conspiracy, and unlawfully possessions was not taken.
In her ruling, Magistrate Fatimo Sodamade, ordered that the accused persons be remanded in prison custody and adjourned the case till March 28, 2018 for mention.

Osun Education: The Investment And The Gains