By Kehinde Ayantunji There seems to be confusion within the fold of Social Democratic Party (SDP) in Osun, as the party’s governorship candidate in the 2018 governorship election, Senator Iyiola Omisore and his supporters within the party have parted ways. While Omisore, a former deputy governor said he had decided to stand with the All…”
Editor
News Osun Politics 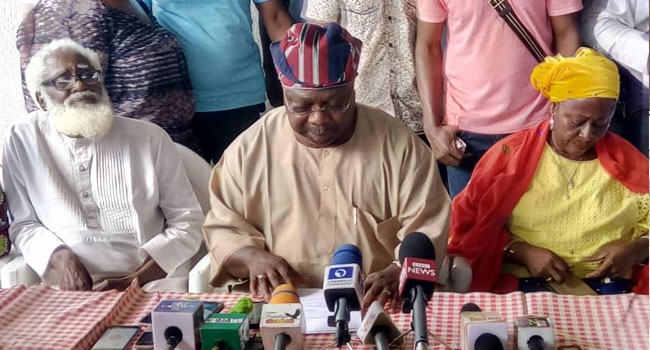 There seems to be confusion within the fold of Social Democratic Party (SDP) in Osun, as the party’s governorship candidate in the 2018 governorship election, Senator Iyiola Omisore and his supporters within the party have parted ways.

While Omisore, a former deputy governor said he had decided to stand with the All Progressives Congress (APC) to jointly win the 2019 presidential and legislative elections, some of his followers have parted ways with him and returned to the Peoples Democratic Party.

This is just as Omisore’s camp in the SDP, led by Dr Bayo Faforinjin said the party remains committed to the ideals of the coalition arrangement with the APC, while the other camp, through a foremost leader of the party, Chief Omole Agboworin said such alliance does not have the sanction of the National leadership and remains anti-party activity.

Governor of Osun, Gboyega Oyetola, during his ‘thank you tour’ of federal constituencies in the state had visited Omisore in his Ile-Ife country home, where the latter declared that he had decided to stand with the APC.

He said, “God made the relationship between me and the APC possible. Osun is one now and Ife remains the source from where all of us draw our strength. I don’t have to tell anybody that I am with the APC. Any wise person should know where I belong”.

The declaration by Omisore sprang reports that he had defected to the APC, a situation that prompted a statement from his camp of the SDP that he remains a member of the party.

A statement by Faforijin dismissed the defection rumours and described it as speculative, saying it emanated from misinterpretation of the ingredients of the coalition arrangement between the SDP and the APC from the September 27th rerun gubernatorial election in which Oyetola emerged victorious.

The statement read: “The Governor has commenced a ‘thank you’ tour which has taken him to some federal constituencies, the turn of Ife federal constituency being Thursday, 10th of January, 2019. As the leader of the SDP, the prime mover and the initiator of the coalition arrangement, Governor Oyetola paid Senator Omisore a courtesy visit in his country home prior to the outing, thus making it imperative for him to accompany the governor to the venue of the event as a good host, and that was what happened.

“The SDP remains committed to the ideals of the coalition arrangement which guarantees mutual recognition of both parties as partners in progress and hereby urges our teeming members to remain resolute in our commitment to our party, the SDP, while praying for the success of Governor Oyetola’s tenure in Osun”.

Noting that they were tricked into supporting Oyetola and Omisore to enter into a coalition, they said they had decided to return to the PDP and support the party’s candidate to win the 2019 elections.

Meanwhile, on another hand, some leaders of the SDP described the decision of the Omisore’s camp to align with the APC as anti-party.

Speaking through Chief Agboworin after a meeting at Fakunle secretariat in Osogbo on Monday, they described this as misinformation, unfounded and fallacious, the claim that the SDP has been collapsed into the APC.

He said: “We are now standing as a united and indivisible party. We will win some seats in the state assembly, House of Representatives and seat of Osun Central Senatorial District in this 2019 election.”

The party chieftain added that among the resolutions of the meeting is that the Ogo-Oluwa office will seize to be the party secretariat and the leadership in the state will soon announce the new party office while the Fakunle office will be used in the interim.

He urged all SDP supporters and loyalists in the state to join hands with the rebuilding team and shun “the anti-party activities being led by Iyiola Omisore”.

NANS Leader, Others Arrested For Murder