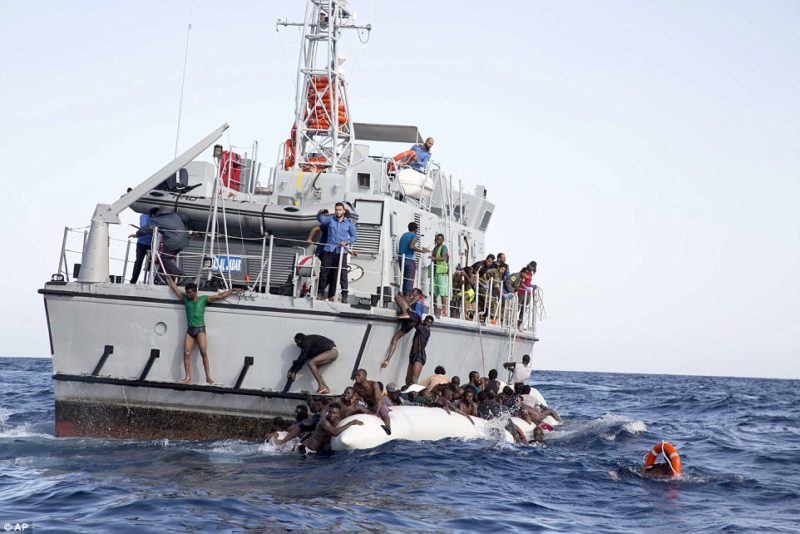 Officials and an eyewitness have revealed that Libyan coastguards rescued 948 African migrants on inflatable boats in several operations and also recovered 10 bodies on Sunday.

“The coastguards picked up illegal migrants in different groups. The first group is 97 on one inflatable boat and the second group is 361 migrants on two inflatable boats,” Naval forces spokesman Ayoub Qassem told Reuters.

“The second group was taken to Khums town,” Qassem said, adding that the two groups included 110 women and 70 children.

A witness watching the arrival of another coastguard ship at Tripoli’s Abu Sittah naval base said a third group included 490 migrants picked up off Qarabulli town.

Among them were 75 women and 20 children.

The operations bring the number, since June 20, of mainly African migrants trying to head to Italy but brought back to Libya to almost 2,000.

The western coast of Libya is the main departure point for thousands of migrants fleeing wars and poverty and trying to reach Europe.

The number of crossings has dropped sharply since July 2017 when an armed group expelled human traffickers from a smuggling hub after an Italy-backed deal.

Libya plunged into chaos following the NATO-backed uprising that toppled Muammar Qaddafi in 2011, with many armed groups and two administrations vying for power.

Most migrants try to head across the Mediterranean toward Italy, hoping they will be picked up by ships run by aid groups and taken there, although many drown before they are rescued. Earlier this month, Italy’s interior minister Matteo Salvini vowed to no longer let charity ships offload rescued migrants in Italy, leaving one ship stranded at sea for several days with more than 600 migrants until Spain offered them safe harbour.

Italy criticised Malta on Sunday over its refusal to take in a Dutch-flagged aid vessel with more than 230 migrants on board.

BREAKING: Many Trapped As Fire Guts WAEC Office In Lagos