Cattle Rustlers To Die By Hanging

A Kogi High Court sitting in Okene on Thursday sentenced two trans-border cattle rustlers – Muhammed Lawal Jauro and Yusuf Sanni – to death by hanging. The duo got the sentence after Justice Josiah Majebi found them guilty of cattle rustling and culpable homicide. The News Agency of Nigeria (NAN) reports that the accused were…”
Editor
News 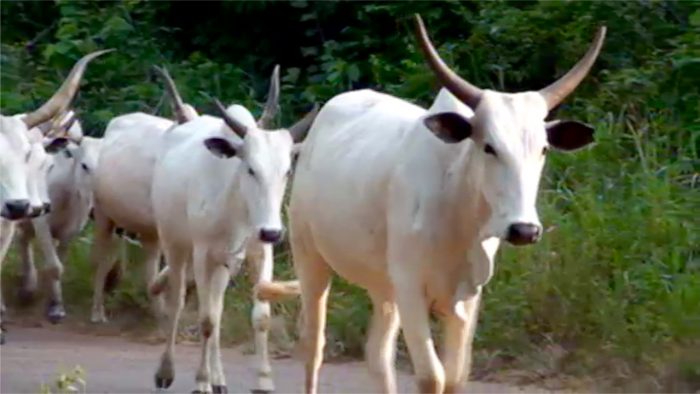 The duo got the sentence after Justice Josiah Majebi found them guilty of cattle rustling and culpable homicide.

The News Agency of Nigeria (NAN) reports that the accused were arraigned on a three-count charge of criminal conspiracy, armed robbery and culpable homicide, contrary to various sections of the Penal Code.

The prosecution had told the court that sometimes in January 2016, one Dauda Abdullahi made a report of a gruesome murder and theft of cows, belonging to one Haruna, in one of the farm centres in Okene.

He said that upon investigation, the accused persons were arrested at Ajase-Ipo in Kwara State, while their leader, Awaijo Wetti, escaped and was still at large.

The prosecution further submitted that the suspects, who had earlier pleaded not guilty to the charges, later pleaded guilty.

The prosecution quoted Jauro as saying in his statement that in December, 2015, one of his friends, Yusuf, a resident of Kabba junction, Zariagi, called him on phone and informed him that there were cows belonging to one Haruna, at a bush in Okene.

“He further suggested that we should go and steal the cows. After that, our leader, by name Agwaijo Wetti, a resident of Tyre village along Okene-Auchi road, asked us to meet at the bush of Okene, which we did.

“Myself, Yusuf, Ado and our leader, Agwaijo Wetti, gathered and, with our cutlasses, went to meet the owner of the cows and all of us machete him with cutlasses until he died.

“Three of us then took control of the cows and took them to Ajase-Ipo in Kwara state,” Jauro was further quoted as saying.

In his judgment, Justice Majebi declared that the confessions of the accused persons were weighty and admissible in determining the case against them.

“The confessions of the respective accused persons are graphic, direct and the accused persons stated that after killing the deceased Haruna, they went with his cows to Ajase-Ipo where they were arrested and the cows were recovered in the bush where they kept them.”

To believe their plea of not guilty, the jurist said “is to believe the holiness of a Bishop hanging a talisman on his neck.”

The judge sentenced them to 28 years each, on the first three count charges, and death by hanging on the fourth charge of culpable homicide.

Another Police Station Razed By Gunmen In IMO