Serge Gnabry celebrated with his NBA-inspired ‘stir the pot’ gesture after scoring two goals in Wednesday’s Champions League semi-final against Lyon to keep Bayern Munich on course to repeat their 2013 treble after a 3-0 victory. Robert Lewandowski added the third for his 55th goal of the season as Bayern go on to face Paris…”
Yusuf
Sports 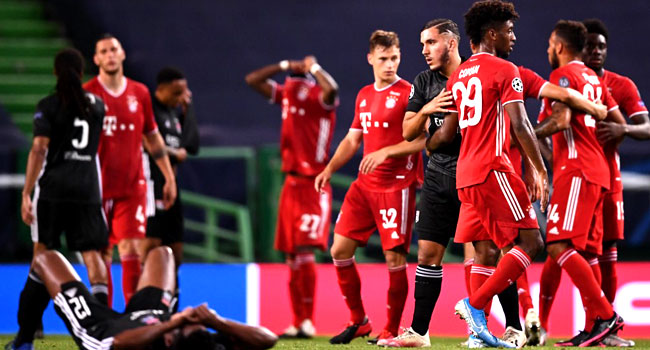 Serge Gnabry celebrated with his NBA-inspired ‘stir the pot’ gesture after scoring two goals in Wednesday’s Champions League semi-final against Lyon to keep Bayern Munich on course to repeat their 2013 treble after a 3-0 victory.

Robert Lewandowski added the third for his 55th goal of the season as Bayern go on to face Paris Saint-Germain in Sunday’s final.

Gnabry gave Bayern an early lead in the Lisbon semi-final with a powerful shot, then doubled the Germans’ lead with a first-half tap-in before being replaced by Philippe Coutinho for the final 15 minutes.

Seconds after a shot by Lyon forward Karl Ekambi hit Bayern’s post, Gnabry opened the scoring with a stunning piece of skill.

After trapping Joshua Kimmich’s long-range pass, Gnabry cut in from the right wing, beat two defenders and powered his shot out of reach of Lyon goalkeeper Anthony Lopes with 18 minutes gone.

Gnarby, 25, then doubled Bayern’s lead on 33 minutes by tapping home after Lopes parried a Lewandowksi shot.

His brace leaves Gnabry on nine Champions League goals this season, including four in Bayern’s stunning 7-2 demolition of Tottenham in the group stages.

He netted two more goals in London last February in a 3-0 win at Chelsea in the last 16, first leg tie.

Gnabry is this season’s third-highest scorer in the Champions League behind Lewandowski (15), who headed Bayern’s third goal against Lyon, and Dortmund teenager Erling Braut Haaland (10).

In helping Bayern win an eighth straight league title and lift the German Cup this season, Gnabry has now scored 23 goals in 45 games in all competitions.

He celebrated his stunning opener on Wednesday by making the gesture of stirring a spoon in a pot.

Earlier this season, he revealed, “I’m a big fan of the NBA, especially James Harden”.

The Houston Rockets playmaker celebrates with the same pot-stirring gesture when he lands a big shot.

Born in Stuttgart, Gnabry joined the Bundesliga club when he was 12.

He joined the Gunners after his 16th birthday in 2011 and was promoted to Arsenal’s reserves after less than a season with the Under-18 squad.

“I went to England because everyone told me not to go, that I couldn’t make it. I wanted that challenge,” Gnabry says of his time in north London.

After only a handful off appearances for Arsenal, Gnabry spent 2015/16 on loan at West Bromwich Albion before being selected for Germany’s Olympic team.

He won a silver medal, aged 21, and finished joint top-scorer with six goals at the 2016 Rio de Janeiro games as Germany lost to the Neymar-led Brazil in the final.

His senior debut followed in November 2016 with a hat-trick at minnows San Marino in Germany’s 8-0 away romp in a World Cup qualifier.

He returned to Germany for 2016/17 with Werder Bremen where he scored 11 goals in 27 appearances for the Bundesliga strugglers.

Bayern bought him in 2017, but immediately loaned him to Hoffenheim, before Gnabry joined the German giants permanently for 2018/19.

He has replaced Arjen Robben, whose winning goal in the London final gave Bayern their last Champions League title in 2013.

Wilder: My Fight With Joshua Will Happen In September Or November