Bashing Through Challenges: The Untold Story Of Goodfaith Chibuzo Etuemena

By Simon Joshua As the ball hit the back of the net at the Rwang Pam stadium, there was jubilation from the visiting supporters, they erupted in wild jubilation, the Coach and his bench raised their hands in joy, as rapturous applause broke out all around them… Then it happened, the shrill blast of the…”
Yusuf
Sports 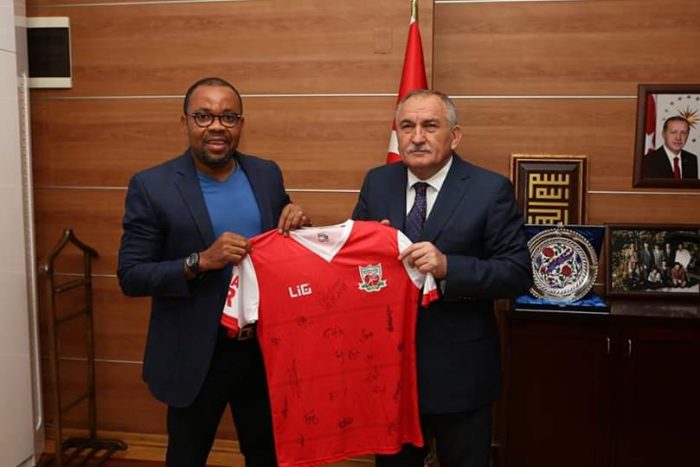 As the ball hit the back of the net at the Rwang Pam stadium, there was jubilation from the visiting supporters, they erupted in wild jubilation, the Coach and his bench raised their hands in joy, as rapturous applause broke out all around them… Then it happened, the shrill blast of the whistle from Folorunsho Ajayi accompanied with finger pointing signalling for a foul that everyone else struggled to see. Those joyous faces turned puzzled, then bewildered before anger and indignation took over.

That was the story on the last day of the 2015/2016 season, at least it was for Heartland FC of Owerri. In that game against Plateau United, the team left the field in protest after what looked like a legitimate goal was ruled out by center referee Folorunsho Ajayi. The LMC eventually penalized Heartland and awarded the 3 points and 3 goals to Plateau United. This condemned the Naze Millionaires to the ignominy of relegation for the first time in their over 40 years of existence.

An inquest was launched immediately, and not long after, the finger pointing began. However, in the midst of all the bedlam and chaos, one man kept his head and set to work immediately, planning for the return of the club to the Nigerian Professional Football League where he believed they rightfully belong. That man was the newly appointed General Manager; Goodfaith Chibuzo Etuemena also known as Bash.

Bash, a foreign trained administrator with ideas considered revolutionary or exotic depending on what side of the divide you stand. The Dutch born native of Imo state spent part of his formative years in the Netherlands, with Amsterdam his base. He relocated to Manchester where he was very involved in pan Igbo activities. He served as the Chairman of the Imo Cultural and Welfare Union, Manchester (an umbrella body covering all Imo state citizens resident in Manchester). He was also the Chairman of the Igbo Progressive Union (IPU) Manchester, yet another umbrella body, this time covering all the Igbos living in the city of Manchester. Bash, being a promoter of social activities floated the annual Couples Nights-Out UK.

Apparently he maintained strong connections with his home state of Imo in Eastern Nigeria, and as a result of his socio-cultural activities in the state, especially with calling on his international connections to positively impact the lives of his Imo brethren, he was invited to head administer the club by the administration of Governor Rochas Okorocha.

They really could have done a lot worse than hiring him. The new GM set to work, reorganizing the club in his own image with ideas of moulding Heartland in the image of the clockwork precision European clubs are run. All these look good and nice, but there were hiccups along the road, there was good old politics to be handled, with egos to be massaged and detractors to be handled with as much tact as possible. Would Etuemena’s Good faith prove strong enough to Bash through all of these hurdles?

Senegal’s Mane ‘Ruled Out’ Of World Cup Over Injury

Neymar Out For Six Weeks, Will Miss Clash With Real Madrid