Former U.S. First Lady Barbara Bush has died on Tuesday evening at the age of 92, after a series of recent hospitalization. Barbara served as the country’s first lady from 1989 to 1993. Spokesman for the family, Jim McGrath revealed this in a statement which read ; “A former First Lady of the United States…”
Editor
News World News 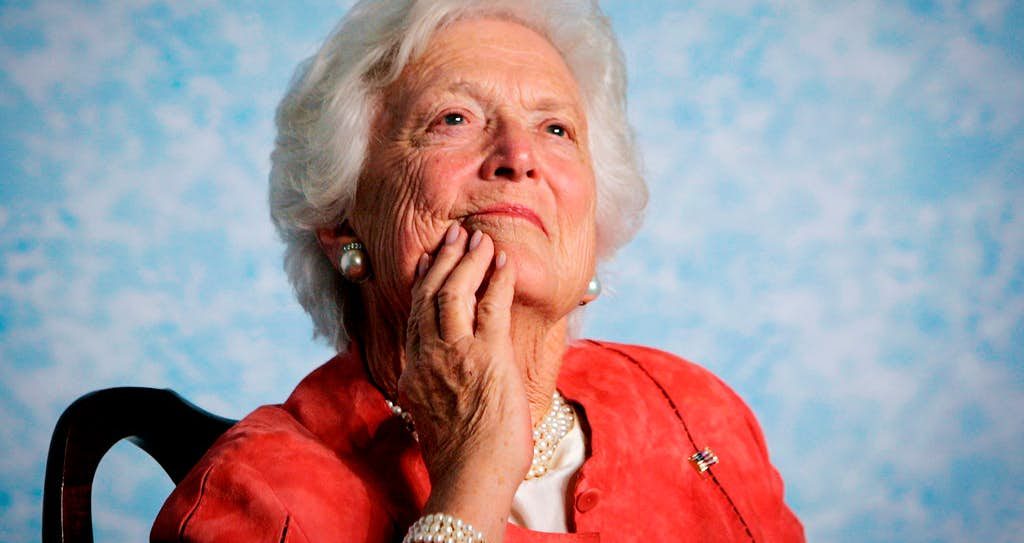 Former U.S. First Lady Barbara Bush has died on Tuesday evening at the age of 92, after a series of recent hospitalization.

Barbara served as the country’s first lady from 1989 to 1993. Spokesman for the family, Jim McGrath revealed this in a statement which read ;

“A former First Lady of the United States of America and relentless proponent of family literacy, Barbara Pierce Bush passed away Tuesday, April 17, 2018 at the age of 92.

“She is survived by her husband of 73 years, President George H.W. Bush; five children and their spouses; 17 grandchildren; seven great grand children; and her brother, Scott Pierce.

“She was preceded in death by her second child, Pauline Robinson “Robin” Bush, and her siblings Martha Rafferty and James R. Pierce.

“The official funeral schedule will be announced as soon as is practical,”

On Sunday, the family said in a statement that Barbara had decided not to seek additional medical treatment and instead sought comfort care at home.

Former president George W. Bush, in a statement on Tuesday night, described his mother as a “fabulous First Lady”.

“My dear mother has passed on at age 92. Laura, Barbara, Jenna, and I are sad, but our souls are settled because we know hers was.

“Barbara Bush was a fabulous First Lady and a woman unlike any other who brought levity, love, and literacy to millions.

“To us, she was so much more. Mom kept us on our toes and kept us laughing until the end. I’m a lucky man that Barbara Bush was my mother,” he said.

“I’m exceptionally privileged to be the son of George Bush and the exceptionally gracious, gregarious, fun, funny, loving, tough, smart, graceful woman who was the force of nature known as Barbara Bush.

“Thank you for your prayers, and we look forward to celebrating and honouring her life and contributions to our family and great nation in the coming days,” he said.

George and Barbara had celebrated their 73rd wedding anniversary in January, making them the longest-married couple in presidential history.

Barbara was the mother of former President George W. Bush and Jeb Bush, the former governor of Florida.

Jeb Bush became the 43rd governor of Florida in 1999 and was a Republican presidential aspirant in 2016 but lost to Donald Trump.

Her husband, the nation’s 41st president, is now 93 years old and struggling with a Parkinson’s-like disease that has confined him to a wheelchair and made it difficult for him to speak.

Jean Becker, chief of staff at George H.W. Bush office said the former president was “broken-hearted to lose his beloved Barbara, his wife of 73 years”.

“He held her hand all day today and was at her side when she left this good earth,” he said

She had been hospitalised multiple times throughout the year due to complications involving chronic obstructive pulmonary disease and congestive heart failure.

Barbara’s funeral is expected to be held at St. Martin’s Church in Houston, where she and the former president have been devoted members for decades.

Trump Thanks North Korea Over Release Of 3 American Prisoners