Aregbesola Harps On Sensitivity To Public Feelings, Improvement Of IGR As He Swears-in Councillors

Governor Rauf Aregbesola on Tuesday evening charged the newly elected councillors and the would-be Chairmen under the newly introduced parliamentary system in the State of Osun to be change agents that will radically transform governance and their respective localities. He was speaking at a ceremony to swear-in the 389 councillors representing the number of wards…”
Yusuf
hero Osun Politics 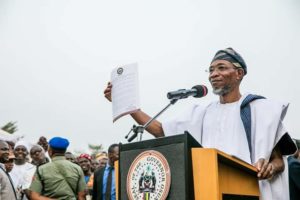 Governor Rauf Aregbesola on Tuesday evening charged the newly elected councillors and the would-be Chairmen under the newly introduced parliamentary system in the State of Osun to be change agents that will radically transform governance and their respective localities.

He was speaking at a ceremony to swear-in the 389 councillors representing the number of wards in the state. . The exercise is to be followed by the inauguration of the parliaments by the clerk of the house in each local government.

The Local Government Chairmen will subsequently emerge from among the councillors in the newly introduced parliamentary system.

Aregbesola who maintained that the parliamentary system is more people-driven and more democratic than the executive system charged the elected officials to give listening ear to people.

He charged them to be prepared to hit the ground running in the delivery of good governance at the grassroots.

“Your first duty is environmental sanitation. You must find an end to the filth by the road side and take ownership of waste management through partnership with private sector. You have three weeks- all dirts on the road sides must be evacuated to designated dump sites.

“Two, take charge of the various markets in your Communities. Eliminate any form of street trading. It is as archaic as nomadic cattle rearing. It is risky to human lives and it is your responsibility to prevent avoidable deaths arising from street trading.

“Third is revenue generation. You must galvanise all available resources to generate revenues for administration and your people. Revenues must be tapped from taxable adults and investments. Free money is no longer available.

Governor Aregbesola asked the newly elected local government parliamentarians to be sensitive to people’s feelings and take their victory at the election very seriously by seeing themselves as custodians of people’s choice. He advised them to avoid tyranny, dictatorship, absolutism and arbitrariness which typify the executive system, urging them to remember that the party remains supreme and must guide their actions and policies.

Aregbesola told them to be ready to act according to the party directives that would be issued regularly in the interest of the people. He dispelled all the misgivings and concerns being raised about the legality of the new system.

“It is most pleasing to see democratic government return to local government. There has been both genuine and malicious concerns, but such concerns are unfounded because the totality of governance of local government administration is determined by the laws made by the state assembly. Nigeria’s Constitution is neutral about this. The constitution does not specify executive or parliamentary system, it only asks it to be Democratic – be it parliamentary or executive. “And because the executive members are appointments in the cabinet, it saves cost of campaign by the politicians and the cost of organizing elections for the executive by the government; unlike where the presidential or the governorship aspirant has to tour the whole nation or the entire state. It also enhances stability. It deepens democracy, like in Britain and in our First Republic,” he said.

Aregbesola congratulated the parliamentarians and the chairpersons that will emerge later, even as he assured them that the proclamation and constitution of the local government parliaments had been signed into law.