The Governor of the state of Osun, Ogbeni Rauf Aregbesola on Friday donated a sum of N150, 000 to a student of Federal University of Technology (FUTA), Mayowa Balogun who was robbed of his school fees by yet to be identified gunmen in Osogbo last week Friday. According to Balogun, some armed men in a…”
Yusuf
Osun 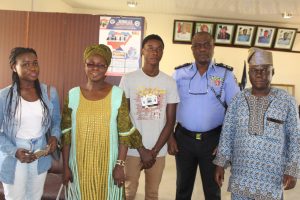 The Governor of the state of Osun, Ogbeni Rauf Aregbesola on Friday donated a sum of N150, 000 to a student of Federal University of Technology (FUTA), Mayowa Balogun who was robbed of his school fees by yet to be identified gunmen in Osogbo last week Friday.

According to Balogun, some armed men in a supposed red security patrol vehicle accosted him on his way from a bank to deposit the sum into his account, forced him into the vehicle and drove him round the city of Osogbo for about four hours.

Balogun said he was dropped after the armed men have collected the N120, 000 with which he was going to settle his school fees and other sundry payments from him.

The incident has since been generating reactions on the social media, and Aregbesola who his active on his twitter account came across the matter.

Presenting the N150, 000 cash to Balogun on Friday, the state Commissioner for Information and Strategy, Mr Adelani Baderinwa said the governor was worried on the incident, particularly on what becomes the fate of the student if he could not raise the school fee again, hence his intervention. Baderinwa who presented the cash at the office of the Commissioner of Police, Mr Adeoye Fimihan, said: Aregbesola got to know the matter through the social media and as a compassionate person, he offered his assistance. He cherishes Mayowa’s education and he does not want anything to stop it.”

In her remarks, Mayowa’s mother, Mrs Balogun who received the cash, said: “I do appreciate Aregbesola’s projects and I am always happy whenever I see him. Even when some people complain about nonpayment of salary, I know him to be a caring and nice person.

“The money to me shows that he is a caring father; he makes me happy and wipes away my tears, because I cried when I got to know that Mayowa has been robbed of his school fees. I suffered a lot to raise money to take care of my children. I collected thrift to get the school fee. God will continue to make
Aregbesola happy. His administration will not falter.”

Speaking, Mayowa absolved police from complicity in the crime, saying: ‘I have been shown all the red vehicles being used for security patrol and I could not find the one that was used to rob me. Also, I did not see any of the people that robbed me among the police officers that were always on patrol shown to me..

The commissioner of police, Mr Fimihan said the police were still investigating the matter, promising that they would get to its root.

Commending the police, Baderinwa said: “The governor commended the security operatives in the state and he is proud of them. He is committed to providing adequate security for lives and property in the state.”

Funds Generated, Received And How They Were Spent – By Accountant General

INTERVIEW: I’ll Be A Single Term Governor, If Elected – Fajobi