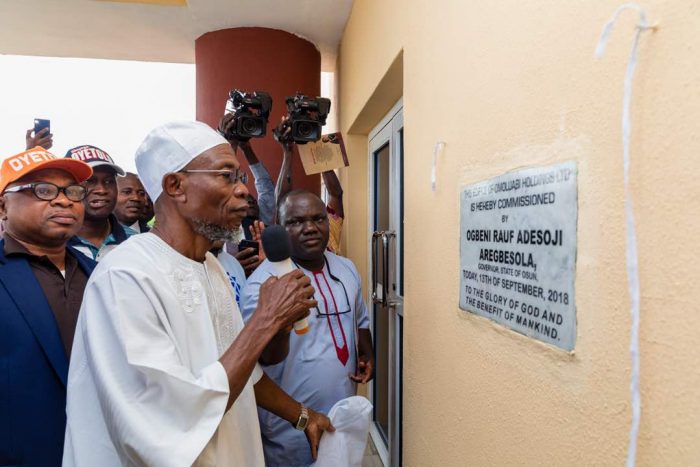 Governor, State of Osun, Ogbeni Rauf Aregbesola, has assured the people of the State of permanent and ceaseless supply of premium motor spirit, PMS.

Aregbesola added that the State would never have shortage of fuel as the filling station has the capacity of 210,000 litres and could served 30,000 vehicles in a month.

While appreciating NNPC for the partnership, Ogbeni also revealed that there would be NNPC supervised stations in all the local government areas in the State.

According to him, ” NNPC has agreed to partner with Osun on Agriculture and alternative sources of energy. Government is a serious business, it needs serious minded people to sustain it. That is why we have picked Isiaka Gboyega Oyetola and his deputy, both are widely connected, cerebral and brilliant.

“The net worth of Omoluabi Holdings Limited will be N7billion by December. We are also working on having filling stations supervised by NNPC in all the Local Government Areas but that of Iwo, Ejigbo, Ila and Ilesa of approximate size will start immediately.”

In his address, NNPC Group Managing Director, Engr. Henry Nkem who represented the General Managing Director, commended the efforts of Aregbesola, adding that the commission is happy to identify with him on his visionary commitment.

Nkem who stated that the commission has sufficient fuel to serve the State and Nigeria at large, also urged residents to patronize the station.

Also speaking, Managing Director of Omoluabi Holdings Limited, Dr. Tunde Faleye, revealed that the company’s fortune had increased from N731million that it was in 2010 to N3.2billion as at December 2017.

He added that as much as Aregbesola had opened many doors of opportunities for youths in the State, there still remains the need to maintain the transformational strides.

“As much as Mr Governor has done, there is still more to be done. It is time for citizens of the State to determine its future and maintain its infrastructure. Continuous development of the State is its citizens business.”

Faleye thereby urged the people of the State to vote for the candidate of the All Progressives Congress, APC, in the September 22nd gubernatorial election, Mr. Isiaka Gboyega Oyetola who described as competent for the task.

Here are photos from the ceremony courtesy Dolapo Julius FG In Talks With Transnet For Railway Concession –Amaechi