The Governor of Osun, Ogbeni Rauf Aregbesola, on Thursday called for overhauling of forest management to save Nigeria and Africa from imminent climate change. He said the continued existence of the black race on the African continent lies in protecting and maintaining the natural rain-forests. This was even as the delegates from 19 African countries…”
Yusuf
News 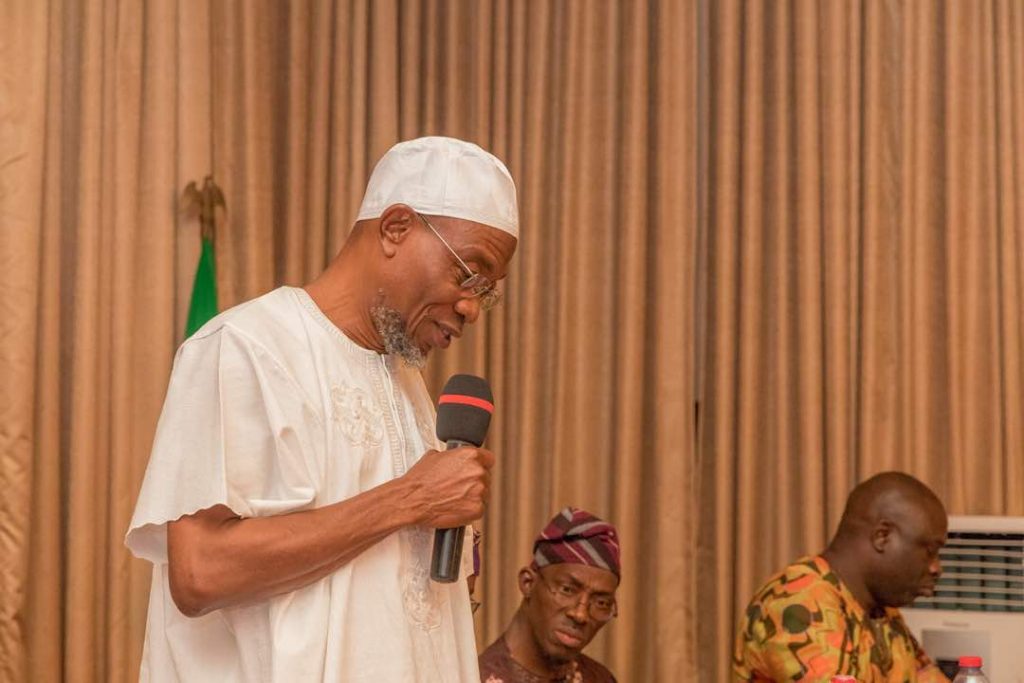 The Governor of Osun, Ogbeni Rauf Aregbesola, on Thursday called for overhauling of forest management to save Nigeria and Africa from imminent climate change.

He said the continued existence of the black race on the African continent lies in protecting and maintaining the natural rain-forests.

This was even as the delegates from 19 African countries at the Afican Forest Forum, a regional West and Central African workshop hosted by the Osun State University and held in Osogbo, Osun State Capital, advocated trees planting to save the continent from possible negative effect of climate change.‎

The members of the Forum with headquarters in Nairobi (Kenya) were on five days West and Central African Workshop to Osun on the need to advance forestry in Africa.

Addressing the participants at the state dinner party organized in honour of the African Forest Forum Training Programme on Modelling Climate and Applications to the Forestry Sector Delegates, Governor Rauf Aregbesola said Africa as a continent didn’t deserve to suffer the bad effect of climate change, had it been the continent’s forest are properly preserved. ‎

Aregbesola attributed the carefree attitude of past leaders to the development of forestry and efficient and effective forest management as cause of the challenges posed by the climate change in Nigeria and Africa.

He expressed displeasure over the way and manner at which the natural rain-forests were being managed in Africa, saying it is high time we rose to the challenge and developed a modality that will strengthen forest management.

Aregbesola lamented the 90 per cent loss of forest resource in Africa, a setback which he said had culminated in the climate change challenges confronting the continent.

He called on the leaders in Africa to wake-up from their slumber by revamping the abundant resources buried in the ‘great lake region’ of Congo, Burundi, Rwanda, Uganda, Kenya, Zambia and Tanzania.
Aregbesola held that the move to resuscitate the vast resources in this region would open the path towards adequate exploration and exploitation of other resources Africa is blessed with.

He warned Africans not to allow the exploiters to take away the God-given resources in the forestry sector.

“It is unfortunate that we are yet to revisit our history by putting all together to revamp the core values and resources residing in the ‘great lake region’‎ as we forgot that the region has the socioeconomic resources to rescue the entire black race from the present challenges.

“Though we have begun forest management since 1890, but in spite of this early knowledge, we have lost 90 per cent of our forest resources, informing us on the need to be more conscious and sensitive to forest development.

“We must begin to understand that afforestation remains the only key to recovering our lost vast land ‎because the greatest test to the freak weather we have in this part of the world is to plant trees so as to prevent the possible havoc from the storms.

“Trees require carbon dioxide and give us oxygen, and since we cannot live for a second without trees, we must encourage seriously the planting of tress as this move will go a long way to protect our environment from possible degradation.

“Though we planned to plant five million but now over three million trees have been planted and we are not in any way deterred from achieving the feat as we appreciate the need for worthy atmospheric environment”.

He therefore commended the leadership of the Forum for promoting ‎forestry in Africa, saying their efforts have been yielding positive impacts as being reflected in the people’s attitudes to their environments.

Earlier in his remarks, the Executive Secretary, African Forest Forum, Godwin Kanero, said the Forum has recorded various successes in its public enlightenment programmes‎ organized across the participating countries.
Kanero disclosed that the Forum was established about 10 years ago to finding a lasting solution to the environmental challenges occasioned by deforestation.

He said, “We are concerned about climate change because we have been informed on the need for humanity to preserve natural environment so as to curtail the menace.

“We are just 10 years plus but since we have been on board, we have been working hard to improve on forestry development in Africa.

“We are keen to the need to have stable, decent, worthy and sustainable environment; that is why we are spending so much time and energy on workshops, seminars and trainings”, he stressed.

We’re Not Allowed To Vote, PDP Members Cry Out In Ife