APC To Atiku: Presidency Is Not For Sale

The All Progressives Congress (APC) has attacked the presidential candidate of the Peoples Democratic Party (PDP), Atiku Abubakar, saying the presidency is not for sale and alleging the politician paid delegates at last weekend’s convention. The party said this in a statement by its publicity secretary, Yekini Nabena, on Monday. “The All Progressives Congress (APC)…”
Yusuf
featured hero Politics 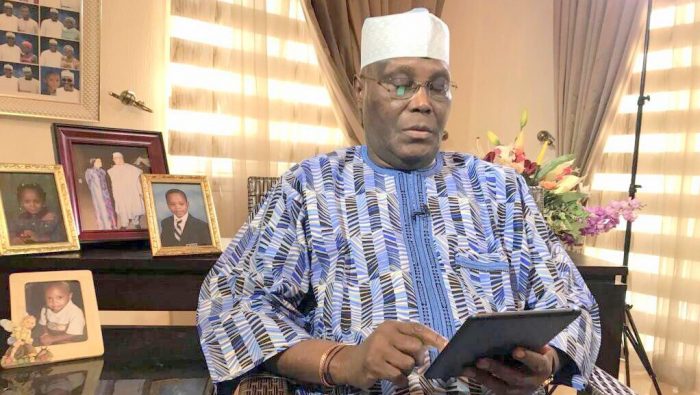 The All Progressives Congress (APC) has attacked the presidential candidate of the Peoples Democratic Party (PDP), Atiku Abubakar, saying the presidency is not for sale and alleging the politician paid delegates at last weekend’s convention.

The party said this in a statement by its publicity secretary, Yekini Nabena, on Monday.

“The All Progressives Congress (APC) congratulates Atiku Abubakar on his election as the Peoples Democratic Party (PDP) 2019 presidential candidate. This is in keeping with our belief in participatory democracy and the electorate’s right to freely choose from candidates in any political contest.”

“However, in assessing candidates to be voted for during elections, Nigerians will normally consider the candidate’s background and antecedents. The pertinent question to ask about Atiku is what his scorecard in public office was? Regrettably, Atiku’s scorecard is abysmally low and he has proven to be an untrustworthy and unreliable character. A case in point is Atiku’s revealing altercation with his former boss President Olusegun Obasanjo which exposed the level of corruption Atiku was enmeshed in.

“In the international level, Atiku has been reportedly place on the global watch list of the United States of America and has avoided travelling to the US to avoid arrest and prosecution over a money-laundering and corruption case in that country.Really, is this the character and antecedent of a candidate Nigerians will be proud to vote for as our President, come 2019?” Mr Nabena said.

Comparing Mr Abubakar to its candidate, President Muhamamdu BUhari, the ruling party said it believes that if Mr Abubakar loses the presidential election in 2019, he will again defect from the PDP to another political platform as seen in the past.

Mr Abubakar has changed parties at least three times in his determination to be president. He was vice president under the PDP, contested the 2007 presidential election under the then Action Congress; sought the presidential ticket of the APC in 2015, before rejoining the PDP last year.

The APC then speaks on its allegation of vote buying against Mr Abubakar.

“Atiku is known as a super rich Nigerian who entrenched the undemocratic practice of buying votes of delegates. During the APC National Convention in 2014, he spent several millions of dollars to buy delegates votes and emerged third, after Buhari and Rabiu Kwankwaso. On Sunday, he reportedly bought over virtually all the PDP delegates and was declared winner of the PDP presidential primaries. With these huge expenses expended to secure the PDP ticket, how will Atiku recoup his “investment” if not from the public treasury should he win the Presidency?

The APC said its candidate, Mr Buhari, does not spend money on delegates and banks only on his personal integrity.

“The Nigerian electorate deserves to be given a choice of decency, integrity and honour and not dirt, corruption, and infamy. The choice between Buhari and Atiku is one between light and darkness; between positive change and business as usual; between transparency and under the table dealings” the statement read.

As 2019 election draws near, the APC said, “If the choice is between a presidential candidate/change agent who is rebuilding the country and refocusing our national priorities and attitudes on one hand, and another candidate who along with his gang of co-looters stole the country’s commonwealth and brought the country to its knees, that choice has already been made by the Nigerian electorate.”

The campaign organisation of Mr Abubakar has however denied that the opposition candidates paid delegates saying the primary was free and fair and broadcast live to Nigerians.

Sunday Igboho Has Not Been Released – Media Aide