Governor Akinwunmi Ambode on Tuesday charged the newly elected local government chairmen in the Lagos State to be hardworking and transparent in the management of resources put in their care. Ambode gave the charge in Alausa at the swearing-in ceremony of the chairmen elected into the 20 Local Government and 37 Local Council Development Areas…”
Editor
featured hero News Oduduwa Politics 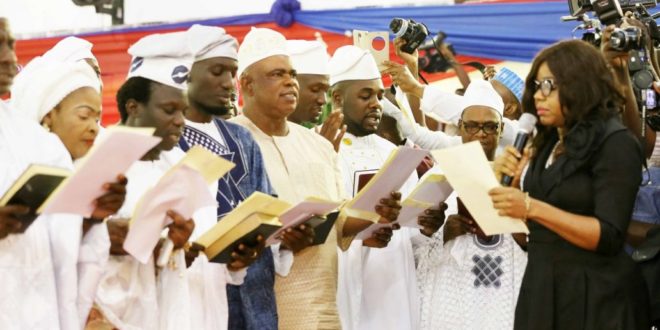 Governor Akinwunmi Ambode on Tuesday charged the newly elected local government chairmen in the Lagos State to be hardworking and transparent in the management of resources put in their care.

Ambode gave the charge in Alausa at the swearing-in ceremony of the chairmen elected into the 20 Local Government and 37 Local Council Development Areas of the state on Saturday.

He told the chairmen that they were coming on board at a time the people expected much, urging them not to disappoint those who elected them.

“The conclusion of the electoral process marks the beginning of real governance which has been activated by your swearing-in today.

“The people have, by their votes, discharged their responsibility. It is now your turn to discharge your part of the social contract you made with the people of your communities, wards and local councils.

“Let me remind you all that you are assuming the mantle of leadership at a time when our people expect so much.

“As you settle down to the business of governance, you must bear in mind that the participation of the people in governance does not end with elections.

“The people must be carried along and given the opportunity to have a say in policy making process and implementation,” Ambode said.

He also charged the new chairmen not to discriminate against anyone, irrespective of political, religious or other leanings

“I want to put it on record today that the elections have come and gone; there must be no discrimination of any form.

“The dividends of good governance must be fairly distributed to all people without prejudice to political affiliation, gender, religious belief or ethnic background.

“We must cherish and nurture the cosmopolitan nature of our state because it is a key factor in our strength and prosperity,” Ambode said.

The governor said that the government recognised the importance of the Local Government administration in having a government of inclusion where everybody had a voice.

“Today, we have completed the chain of government linking the Wards, Councils and Local Government Areas to the State Government.

“Our government has, once again, demonstrated our total commitment to deepening democratic values and good governance at the grassroots,” he said.

Ambode commended the Chairman of the Lagos State Independent Electoral Commission (LASIEC), Retired Justice Ayotunde Phillips, commissioners and the entire staff of the commission for delivering a free, fair and credible election.

He also commended residents, especially those who defied the rains on Saturday to perform their civic responsibility.

“The hallmark of democracy is the participation of the people through the free exercise of their franchise to elect the people they want to represent them. This is the true source of legitimate mandate to lead a people,” Ambode said.

Meanwhile, the governor informed the gathering that the Lagos State Government was set to take firm control over its inland waterways and the adjoining lands, including all sand dredging activities, following an appellate court ruling in its favour.

He warned that the era of uncontrolled dredging was over, as the court ruling would boost the government’s efforts in abating flood in the state.

The Lagos Island East Local Government Chairman, Mr Kamal Bashua, who spoke on behalf of the chairmen, promised their unalloyed support. He said they would build on the landmark achievements of the government at the grassroots.