Donald Trump faced a new challenge to his authority Friday after US media reported that his deputy attorney general had discussed ways to force him from office on grounds of incompetence, just months into his presidency. In the latest bombshell to rock the troubled administration, The New York Times and The Washington Post reported that…”
Editor
World News 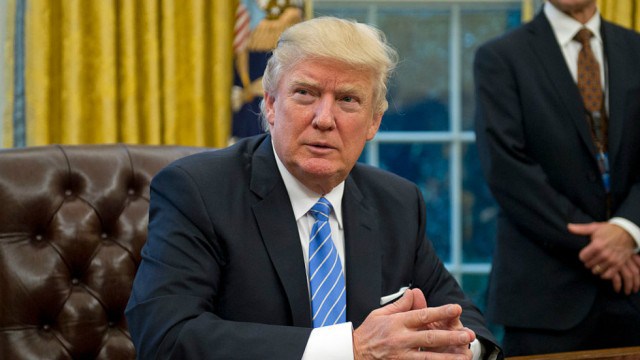 Donald Trump faced a new challenge to his authority Friday after US media reported that his deputy attorney general had discussed ways to force him from office on grounds of incompetence, just months into his presidency.

In the latest bombshell to rock the troubled administration, The New York Times and The Washington Post reported that Rod Rosenstein in May 2017 had suggested secretly recording Trump for evidence of White House dysfunction — and using that to formally remove him from power.

Coming on the heels of an explosive book by respected White House chronicler Bob Woodward, the reports added to mounting evidence indicating that numerous people in Trump’s own government have serious doubts about his fitness for office — and have actively worked to undermine him.

The Time and Post reports were both based on secret memos by a former FBI director — which some speculated may have been leaked in order to undermine Rosenstein, and in turn the Russia special prosecutor Robert Mueller.

“I never pursued or authorized recording the president and any suggestion that I have ever advocated for the removal of the president is absolutely false,” he added.

And the Justice Department released a statement by a former senior official — who would not be identified — saying that he was “in the room” at the time and that Rosenstein was only joking.

“The statement was sarcastic and was never discussed with any intention of recording a conversation with the president,” said the former official.

Trump’s son Donald Trump Jr held up the reports as evidence of disloyalty among the president’s entourage.

“Who are we kidding at this point?” he tweeted, above a link to the Times article. “No one is shocked that these guys would do anything in their power to undermine @realdonaldtrump.”

Trump’s Republican ally Mike Huckabee meanwhile urged Attorney General Jeff Sessions to fire Rosenstein — or for Trump to fire them both if he refuses.

Washington was convulsed this month by the release of Woodward’s book on the inner workings of the White House — which he described as mired in a perpetual “nervous breakdown” with staff battling to control an unstable president.

Compounding Woodward’s account, The New York Times went on to publish an op-ed by an anonymous senior official — whose identity remains a mystery — claiming that select administration staff members are so alarmed by the president’s “erratic” and “amoral” behavior that they actively sabotage his most extreme policy efforts.

“We believe our first duty is to this country, and the president continues to act in a manner that is detrimental to the health of our republic,” the writer said.

The latest reports were based on private memos written by then-interim FBI director Andrew McCabe, summarizing discussions with Rosenstein.

According to the Times, Rosenstein was unhappy about being “used” by Trump in the firing of Comey, as well as concerned about other turmoil in the White House under the new president
Because Rosenstein oversees the Russia probe, there was immediate speculation that the memos may have been leaked in order to damage Rosenstein, and by extension Mueller — more than to hurt Trump.

Rosenstein appointed Mueller in May 2017 as the special counsel for the Russia investigation.

After securing convictions of seven people associated with Trump, Mueller’s probe increasingly threatens the White House and the president himself.

Trump has repeatedly pressured Rosenstein and Sessions to shut down what he calls an illegal “witch hunt.”

The president did not respond specifically to the shock news reports, but at a political rally in Missouri late Friday he referred to “what’s being exposed at the Department of Justice and the FBI.”

“There’s a lingering stench and we’re going to get rid of that too,” Trump finished.

Chuck Schumer, the top Democrat in the Senate, immediately sought to pre-empt any attempt to fire Rosenstein.

“This story must not be used as a pretext for the corrupt purpose of firing Deputy Attorney General Rosenstein in order (to) install an official who will allow the president to interfere with the Special Counsel’s investigation,” Schumer said.

The Times said Rosenstein made the comments in a particularly chaotic period, in the weeks right after he was appointed deputy attorney general.

Rosenstein’s alleged allusion to the 25th amendment of the US Constitution, which provides for removing a president if they are judged unfit for office, came just after Trump fired FBI director James Comey — invoking a memo written by Rosenstein.

According to the Times, Rosenstein was unhappy about being “used” by Trump in the firing of Comey, as well as concerned about other turmoil in the White House under the new president.

Buhari’s US Speech Is Rice Without Stew By Fredrick Nwabufo