One million dollars was recovered by an investigating team of EConomic and Financial Crimes Commission in the wardrobe Of the former Chief of Defence Staff, Alex Badeh. A witness gave this testimony at the trial of Badeh at the Federal High Court, Abuja. The former military chief is facing trial for money laundering. Mr Goji…”
Editor
hero News 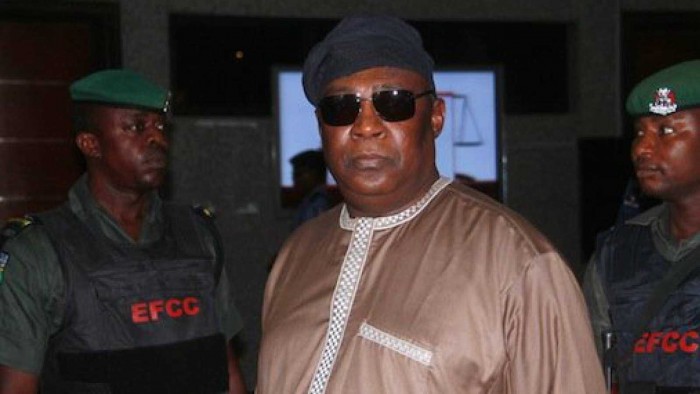 One million dollars was recovered by an investigating team of EConomic and Financial Crimes Commission in the wardrobe Of the former Chief of Defence Staff, Alex Badeh.

A witness gave this testimony at the trial of Badeh at the Federal High Court, Abuja. The former military chief is facing trial for money laundering.

Mr Goji Mohammed, the 15th witness to testify in Badeh’s trial, said he was part of the EFCC team, led by Mr Isyaku Sharu, that conducted the search in Badeh’s house in Asokoro, Abuja.

The News Agency of Nigeria (NAN) reports that the ex-Chief of Defence Staff is standing trial on money laundering offence he allegedly committed while serving as Chief of Air Staff.

Mohammed further said the commission received intelligence report on another property located at No. 6 Ogun River Street Maitama, which was found to be Badeh’s property.

He said they accessed the building through the balcony by climbing, adding that they invited the security man of the neigbouring house to witness the search.

“We saw 16 bundles of 50 US dollars notes and two sealed bundles containing 100,000 US dollars which we estimated to amount one million US dollars.

“On further counting the money in our office we discovered it was exactly one million dollars,’’ he said.

He said they also found a red box which he could not precisely remember what was inside, adding that they also found two way bills of furniture supplied to the building.

When the prosecution sought to tender the search warrant, the red box and the way bill as evidence, the move was objected to by the defence team.

Mr Lasun Sanusi (SAN), counsel for the defendant objected to the admissibility of the items, saying they were purportedly obtained from an illegal search.

Sanusi cited Section 115 of Administration of Criminal Justice Act (ACJA) 2015, which states that the occupant of a place searched or a relation shall be at the house and see the items seized.

He said no provisions of law permitted state security agents to conduct search by looking for strangers on the street to witness it.

Sanusi said the law gave the owner of the property the impetus to nominate a representative to witness such search if he or she could not be present.

“My Lord, the witness had earlier confirmed that when they were to conduct search on the defendant’s house at Asokoro, they took him along to witness the search, why was this other one different.

“It is on record that the defendant was still in detention when the purported search was done in his house at Maitama which is a clear violation of the law.

“My Lord, we are not against the court admitting the search warrant as evidence but we vehemently oppose to the admissibility of the other items,’’ he said.

On his part, the Prosecution Counsel, Mr Rotimi Jacobs (SAN), argued that Section 149 and 150 of ACJA which deals with house search warrant permitted the presence of two witnesses.

“This permission covers the person to whom the warrant is addressed and a neighbour within the neighbourhood the property is located,’’ he said.

According to him, the provision allows the person to whom warrant is addressed to look for a witness in the neighbourhood.

He, therefore, argued that no provision of the law compelled the property owner to be present before a search warrant can be executed.

Justice Okon Abang, however, adjourned the matter till Feb. 22 for continuation.

No State Has Approval For Weapons, Presidency Replies Gov Akeredolu