The Chief of the Air Staff (CAS), Air Marshal Sadique Abubakar, has warned all its personnel against any form of electoral malpractice in the forthcoming 2019 general elections. While speaking during the inauguration of three transit apartments in Sam Ethan Base, Ikeja, Lagos, Abubakar urged Air Force personnel to remain focused on constitutional duties and protection…”
Editor
News 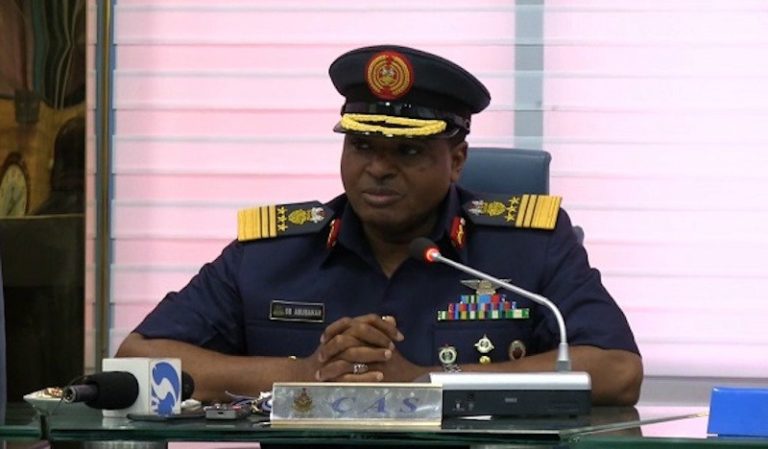 The Chief of the Air Staff (CAS), Air Marshal Sadique Abubakar, has warned all its personnel against any form of electoral malpractice in the forthcoming 2019 general elections.

While speaking during the inauguration of three transit apartments in Sam Ethan Base, Ikeja, Lagos, Abubakar urged Air Force personnel to remain focused on constitutional duties and protection of the territorial integrity of the country.

“I want to use this opportunity to urge you to remain apolitical ahead of the forthcoming elections in the country.

“I urge you to remain focused on your constitutional duties and not to get distracted at social media outburst on politics and elections.

“As members of the armed forces and Nigerians, we have the right to cast our votes to whoever it is that we want to vote for, but we must be very careful not to be mobilised by some politicians for selfish reasons,” he said.

He said that NAF, in line with its statutory responsibilities, had contributed greatly and would not rest on its oars towards the restoration of peace, security, humanitarian efforts and wellbeing of Nigerians.

“As you are aware, no modern battle, be it conventional or asymmetric, can be won without air power. The invaluable contribution of the NAF in the Northeast and other theatres of operation nationwide attests to this.

“Let me also reiterate that remarkable successes have been achieved in Operation Lafia Dole and other theatres of internal security operations, as well as other activities in aid to civil authorities across the country.

“In the last three years, the Federal Government has acquired 18 brand new asserts, platforms for the NAF. We have the 10th Super Meshack Aircraft for training in Kaduna, we also have the four Mi-35, amongst others,” he said.

He thanked President Muhammadu Buhari for his relentless support to the military, especially the Nigerian Air Force, through the provision of platforms and logistics support for operations.

“The reactivation of many platforms and the acquisition of new ones have gone a long way in boosting our capacity for counter terrorism and counter insurgency operations.

“The efforts of the government are already yielding results as the hydra-headed Boko Haram terrorists are being continually decimated,” he said.

Abubakar said he was pleased to inaugurate three blocks of six flats and one block of 10 bedroom officers’ transit apartments.

“Providing decent housing for officers and airmen/airwomen remains one of the first priorities of our policy thrust towards ensuring that the Nigerian Air Force personnel and their families live in befitting accommodation.

“In this regard, we have continued to embark on new constructions to address the inadequacy of houses in various units across the country as well as massive renovation/upgrading of the existing quarters,” he said.

Dogara Swears In Dorathy Mato As Replacement For Sacked Hembe