You Are A Friend Of The Poor, Gov Elrufai Praises Osinbajo

The Governor of Kaduna State, Mallam Nasir El-Rufai, has poured encomium on Vice President Yemi Osinbajo, describing him as a friend of the poor and a man of deep social conscience. Governor El-Rufai stated this on Thursday during the commissioning of the Kasuwan Magani market and 10 kilowatts Solar PV Mini-Grid in Kajuru, Kaduna State….”
Yusuf
News Politics 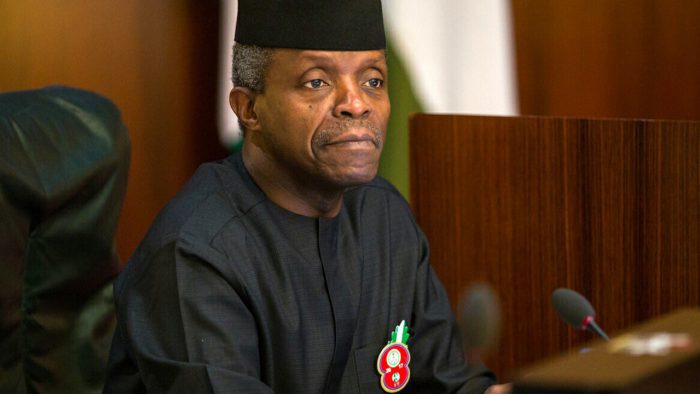 The Governor of Kaduna State, Mallam Nasir El-Rufai, has poured encomium on Vice President Yemi Osinbajo, describing him as a friend of the poor and a man of deep social conscience.

Governor El-Rufai stated this on Thursday during the commissioning of the Kasuwan Magani market and 10 kilowatts Solar PV Mini-Grid in Kajuru, Kaduna State.

According to him, “We waited eight months after the completion of this market because we wanted you to commission this market; we insisted on you for several reasons.

“The first is that you are a man of deep social conscience; you care deeply about poor people and you care about giving them opportunities to prosper economically.

“This is one of the reasons why we felt that you are the one that will commission this market.

“The second reason, sir, is that you are bridge builder; you are a pastor who is friends with Imams and emirs; you are a professor who can speak the language of ordinary people.

“You are a lawyer who pursues justice, not a technicality; you care for people, you care for Nigerians and you care for unity in diversity; you care about stopping differences in religion and ethnicity, and you always promote peaceful coexistence,” he said.

El-Rufai further maintained that the community needed an apostle like Professor Osinbajo to preach unity and peaceful coexistence.

According to him, no one is more qualified to inaugurate the market in the community than the vice president.

“So, we waited eight months to bring you here and we are happy you made the time to come here, and you can see the excitement of the people here for you visiting their community,” he said.

While responding, Professor Osinbajo said that there were two important themes that the Kasuwan Magani market project symbolized.

According to him, the first in the history of the market.

He said the market had been burnt down so many times in the heat of ethnic conflicts.

“And there is no point looking for who was right and who was wrong; only to say that the destruction of a place of trade and commerce is bad for everyone.

“Loss of jobs and the goods and services that the market provides; no matter what our grievances maybe we must never burn down public facilities.

“It hurts the people we claim to be fighting for far more; so there are many important and difficult lessons about the importance of community building, partnership, and tolerance amongst our people.

“These lessons must be learned, but in learning these lessons, it is also very critical that the history of this market does not prevent us from moving forward.

“It is important that this community in Kaduna State looks forward and creates a new narrative for this market, a narrative created of growth, togetherness, economic progress and development.”

Professor Osinbajo said that the second theme was the effective coordination and collaboration between the Federal Government and the Kaduna State Government.

He said that the Kaduna State Government’s commitment to rebuilding and modernizing the Kasuwan Magani Market was commendable.

The Vice President said he was so happy that the Ministry of Power through the Rural Electrification Agency, REA, partnered with Kaduna State Government and Blue Camel to create a sustainable, clean source of power for the market.

“The 100 kilowatt Solar PV mini-grid built by Blue Camel, I understand is planned to go up to 500 kilowatts; we hope it can go above 1MW as the market and economic opportunities here grow.

“It is impressive what the Kaduna State Government has been able to achieve with the repositioning of the Kaduna Market Development and Management Company (KMDMC).

“The Galaxy Mall we just visited and this project at Kasuwan Magani are both products of the focus of the Kaduna State Government on enabling commerce and improving the economic prospects of its citizens.

He commended Hafiz Bayero, the managing director of the KMDMC, for the great work on both projects.

Professor Osinbajo said that the funding mechanism for the Solar PV plant would not have been possible without the intervention of the President Muhammadu Buhari’s administration.

“Despite the passage of the Electric Power Sector Reform Act in 2005, the activation of the Rural Electrification Fund (REF) was only commenced in 2019, a staggering 14 years after the passing of the Act.

“In the two REF cycles executed thus far, more than N6 billion worth of projects have been executed with 42,000 connections being created -impacting an estimated 200,000 Nigerians,’’ he said.

The Vice President had earlier attended as the Special Guest of Honour, the Kaduna State Investment Summit, KADINVEST 6.0.

Human Trafficking Is The Only Lucrative Business In Libya- Returnee

No Plans to Evacuate Igbo from North – S/East Governors