Defender Vincent Kompany has been named in Belgium’s 23-man squad for the World Cup despite being an injury doubt – but striker Christian Benteke misses out. Manchester City captain Kompany, 32, suffered a groin injury during Saturday’s goalless draw with Portugal. Manager Roberto Martinez said he would make a decision on the centre-back’s fitness closer…”
Yusuf
Sports 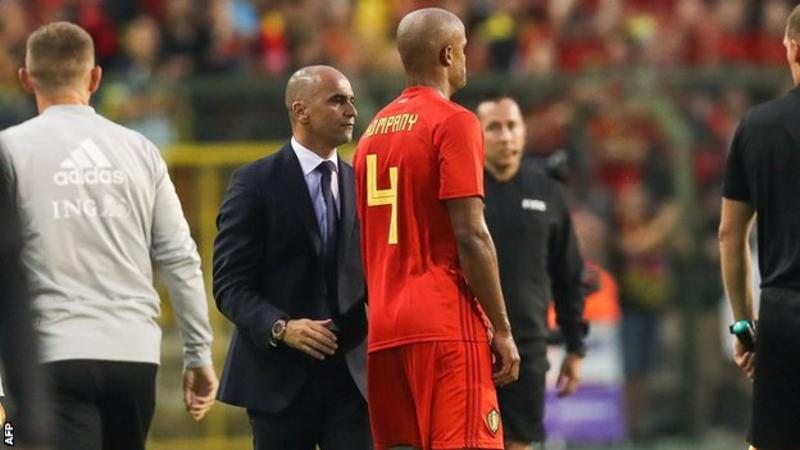 Defender Vincent Kompany has been named in Belgium’s 23-man squad for the World Cup despite being an injury doubt – but striker Christian Benteke misses out.

Manager Roberto Martinez said he would make a decision on the centre-back’s fitness closer to their opening match against Panama on 18 June.

Kompany has had a series of injuries over the past five seasons, although he was able play without problems for Premier League champions Manchester City from January until the end of the campaign.

Martinez – whose side are in England’s group – said he can call up a replacement until 24 hours before the Panama game.

“He is a true leader – his leadership is essential for us,” the Spaniard added.

“I expect a lot from him,” said Martinez. “He is a real talent in one-on-one situations. He will bring us freshness.”

Benteke has scored three goals for club and country this season and Martinez has preferred Manchester United’s Romelu Lukaku and Michy Batshuayi of Chelsea for the central striker position.

Newcastle goalkeeper Matz Sels, Watford’s Christian Kabasele and fellow defender Jordan Lukaku of Lazio are the other players to miss out, while Los Angeles FC defender Laurent Ciman is on standby.

Last week, footage of 23 mattresses being loaded up by a Belgian bedding company before their departure for Russia had people guessing who would miss out on a place.

But those assumptions turned out to be wide of the mark.

West Brom forward Nacer Chadli, who has only played twice since December, has made the squad, while the ankle injury that Batshuayi suffered while playing for Borussia Dortmund in April has not prevented his inclusion.

“The last time I was on a pitch, some doctors told me that my World Cup dreams were over, today I’m going Russia,” Batshuayi posted on social media.

Ahmed Musa Arrested On Suspicion Of Beating His Wife