Jonathan said this on Thursday when he visited Rivers State for the commissioning of the Second Nkpogu Bridge as part of activities to mark the second anniversary of the Wike administration. The former President said, “Governor Wike has performed wonderfully well. I have no regrets that Governor Wike is the governor of Rivers State. I…”
Yusuf
News 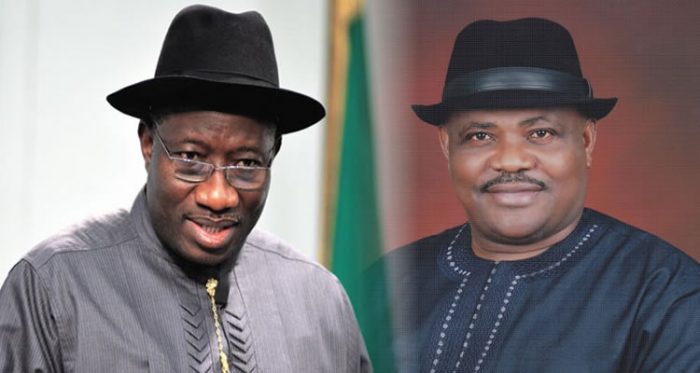 Jonathan said this on Thursday when he visited Rivers State for the commissioning of the Second Nkpogu Bridge as part of activities to mark the second anniversary of the Wike administration.

“Wike has shown so much commitment to infrastructural development. The whole of Rivers State is now a construction yard.”

According to him, the appreciation for the excellent performance of Governor Wike goes beyond party lines.

He recalled that Acting President Yemi Osinbajo after visiting the state also stated that the governor was delivering on projects.

While appreciating the people of Rivers State for the support they gave him throughout his involvement in national politics, he expressed happiness over the invitation to commission the important Second Nkpogu Bridge.

Governor Wike assured Jonathan of the unwavering support of Rivers people, saying that he would never be abandoned.

He said the decision to invite the former President to commission the bridge was a clear message to the nation that he would not be abandoned.

“We cannot come out in the public and begin to castigate our own. Those of them who do that should have a rethink. For us, it doesn’t matter the blackmail against Jonathan, we will continue to back him”.

The governor accused the All Progressives Congress-led Federal Government of failing to keep its promises, saying after two years of APC rule, Nigerians have seen the difference between good governance and false promises.

Boko Haram Leader To Reveal Hide Out And The Newspaper Headlines

We’re Not Allowed To Vote, PDP Members Cry Out In Ife