Barcelona president Josep Maria Bartomeu has revealed that that he wants the club’s Argentine star Lionel Messi to remain linked to the club forever and that he plans to sit down with the forward soon to discuss extending his contract. Messi, 31, penned a deal with the the Spanish champions less than two years ago…”
Yusuf
Sports 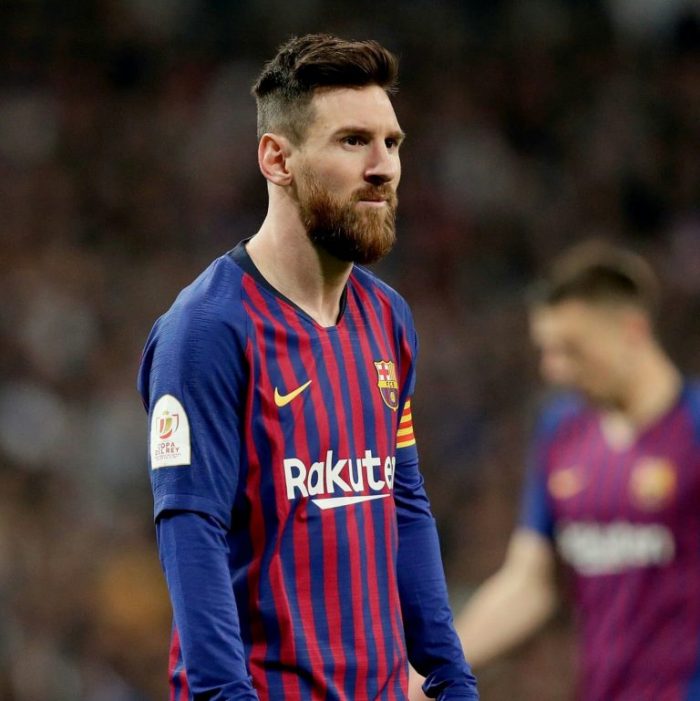 Barcelona president Josep Maria Bartomeu has revealed that that he wants the club’s Argentine star Lionel Messi to remain linked to the club forever and that he plans to sit down with the forward soon to discuss extending his contract.

Messi, 31, penned a deal with the the Spanish champions less than two years ago that runs until the summer of 2021.

That contract will take the prodigiously talented player up to his 34th birthday.

The former Ballon d’Or winner is showing no signs of slowing down on the pitch.

He has already scored 42 goals in all competitions this season and Bartomeu is already thinking about what would be his 10th, and potentially last, professional deal at Camp Nou.

“We want him to have a really long career so we can keep on enjoying him,” Bartomeu said.

“Lionel’s managed to break down borders. Everyone admires him and he’s applauded at other stadiums by rival fans,” Bartomeu told ESPN in an exclusive interview.

“We would like to renew his contract, that’s the idea. He is young — you can see that [in his performances] — and he still has two years on his deal. He’s always improving, always innovating. I believe he still has many years in front of him and in the coming months we will sit down with him so that he has many more years at Barcelona.

“Messi is a one-club man. It’s more than what he does on the pitch — his relationship with Barca will last forever. I use the example of Pele, who was always at Santos. We want Messi to always be at Barca, whether that’s playing or linked to the club [when he’s retired].”

Messi is already Barca’s record goalscorer with 594 goals and he recently surpassed Andres Iniesta to become the player with the second most appearances in the club’s history (676). Only Xavi Hernandez (767) has made more.

Since Messi made his debut in 2004, Barca have enjoyed more success on the pitch than at any other time in their history. They have won eight of the last 11 La Liga titles and four of their five Champions League triumphs have come with him in the squad. They have also won the last four Copa del Reys.

However, there will come a day when Messi hangs up his boots and Bartomeu says it’s important that Barca are prepared for life without him.

“Messi changed completely the sense of Barca,” the president added. “In the way of keeping our club on top [in terms of] results, [winning the] top competitions and trying to win every season. Messi knows his body well and the day he believes he can’t add [what he wants], he will leave. [We have] to prepare for the future. Leo Messi is our leader, he’s the best player in the world of football, he’s playing with us, he’s playing fantastically, but we know it won’t be forever,” he said.

“Maybe in three, four or five years, Leo Messi will say: ‘OK, I am going to stop playing football.’ So we are preparing our club for the future, for the time post-Leo. Because we would like to still be the top club at that time. So, it’s a way of working, of investing, also of taking risks.

“We invest in young players, on homegrown players from La Masia, but also on bringing players from other clubs, just to keep this level of excellence.”

Barca hope that Messi can lead them to the third Treble in their history this season — they’re eight points clear at the top of La Liga, into the Copa del Rey final and have a Champions League quarterfinal tie against Manchester United that begins on April 10.

United have not won a Premier League since Sir Alex Ferguson retired and asked if Messi’s eventual departure could trigger a similar period of misfortune at Barca, Bartomeu said: “Yes, exactly, that’s what we are working on [avoiding].

“Sometimes I explain to members of the club and the board, what we are doing is bringing right now very young players to the club. Young players that we think are very talented: [Clement] Lenglet, Ousmane Dembele, Arthur Melo, Frenkie de Jong, Marc-Andre ter Stegen is still very young.

“There a lot of players that will continue playing after the Messi era.”