Alhaja Sherifat Aregbesola, wife of the Governor, State of Osun, Ogbeni Rauf Aregbesola has been known to be a pillar of support for her husband through thick and thin. One of the few governors’ wives who do not believe in the gaudiness and contrived glamour of office, Alhaja Sherifat would rather complement her husband’s people-centric…”
Editor
News Osun 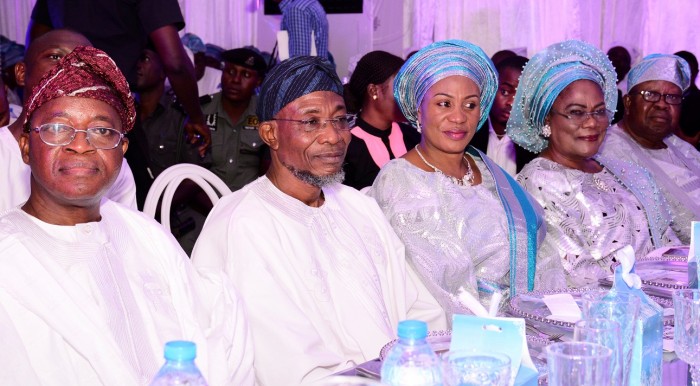 Alhaja Sherifat Aregbesola, wife of the Governor, State of Osun, Ogbeni Rauf Aregbesola has been known to be a pillar of support for her husband through thick and thin. One of the few governors’ wives who do not believe in the gaudiness and contrived glamour of office, Alhaja Sherifat would rather complement her husband’s people-centric activities than compete for attention with him.

In this interview with the Progressive Focus Magazine, she reveals intimate details about her husband.

Your husband is seen to be tough; from being a relentless activist to his emergence as the executive governor of the State of Osun; how does it feel being his wife?

How has the journey been since you came together as a couple?

We met so many years ago and we got married exactly 30 years back. So far so good, as you know, there is no marriage that does not have its own challenges. My own challenge was only during the struggle for his political ambition. Even with that, we can be said to be the best couple in the whole world. The time of his political struggle was so tough, especially when he was detained and put in Yaba Police Station (Lagos). The one that really made me feel so bad was when my daughter was around. The subsequent ones, I was able to manage them because I was alone. But this particular one, our daughter was around. Her witnessing what we have been going through was really tough for me. I felt so bad. That was the only one that I felt so bad about. But thank God, we were able to manage it and victory came eventually.

So much happened during the struggle to reclaim Ogbeni’s mandate, especially when party agents were killed and he was being persecuted.

As his wife, were you not scared of his life?

Of course, I was. There were so many things that made me fear for his life. First of all, I really feel for those who lost their lives and I pray to God Almighty to be with their families. During the struggle, so many things happened but there was a particular one on the judgment day when his application was thrown out for the second time by the election petition tribunal in Osogbo here. That was before he went to the Appeal Court and won. I told him then that after this, there is no more appeal and nothing again.

I told him I meant it. He said if he goes for the appeal, what would happen? I said he should just wait and see, but insisted that I meant what I was saying. He asked if I was sure; and I said I was. He said okay, I have heard you, I won’t go for the appeal again.

Fortunately, he called Asiwaju Bola Tinubu (I call him Big Daddy), and told him what I said. In less than 15 minutes, Big Daddy called me. I didn’t have his number because I didn’t have any cause to call him. If I needed to talk to him, I would talk to my husband first. So that day, I saw the strange number but I didn’t pick it. Later, Mrs. Remi Tinubu called me and I picked. She said, ‘where are you?’ I said ‘I am home’. She said ‘your daddy has been calling you, why didn’t you pick his call?’ I said ‘I didn’t know it was him’. She said I should hold on for him. He (Asiwaju Tinubu) now said ‘Sheri awa n lo si appeal o, a ma a lo si appeal’ (Sheri, we would go to the Appeal Court). I said yes sir! ‘A maa fight e tan ni (We would make sure we finish the battle). I said ‘yes sir!’ And that was all. I later accused my husband of calling Asiwaju to talk to me. Later, Mrs. Tinubu came and met me crying and she asked why? I said I was fed up and that we should just forget about it.

She really encouraged me and to God be the glory today because we went for the appeal and God answered our prayer.

How did you feel when the news came that he eventually won at the Appeal Court despite your earlier warning against it?

I was happy because it was a Friday. Some days to the judgment, I already knew that something good was going to happen but I couldn’t figure out what it was. I kept on having the feeling that something was about to happen, but what it was, I didn’t know. I was just crying. I cried to the extent that my husband called Mrs. Tinubu to come over. She came and when she asked me what the problem was, I could not say anything. If anybody asked me, I wouldn’t be able to answer. Instead, I would still be crying. When you say ‘don’t cry’ I would start again. That was how I knew that something was going to happen.

But you knew that the Appeal Court was about to give its judgment on your husband’s matter?

In fact, I didn’t put my mind on the Appeal Court issue.

You couldn’t connect the two?

I couldn’t at all. I had erased the issue of politics in my life. I had erased it totally. So I was not thinking about the appeal court matter. But Mrs. Tinubu told me that some days to that day, God revealed to her that He had answered my husband’s prayers through that cry.

Please, tell us specifically what kind of a man Ogbeni Rauf Aregbesola is at home?

Whao! He is fantastic. That is a very good question. Sometimes, if I look at him, I ask myself, do I really deserve this man? He is a very good husband, a God- fearing person. I don’t know how to qualify him. He has the love of people in his mind. He is a free giver. If possible, he could pluck his eyes and give to another person. He cares for other more than himself. He is a very nice man. He is my friend, my husband, my father, my companion, and a good father to his children.

Can you take us back to how he proposed to you?

(Loud laughter) That was 30 years ago. Fantastic! That is good. How he proposed to me? He walked up to me and he proposed to me. Just as simple as that? Yes, as simple as that. He saw me, came over and said I’m Rauf. I said yes, what do you want? He said can we be friends and I said that is fine. That was all and that was how we parted that day. That was in Kaduna when he came for his mandatory one year National Youth Service Corps (NYSC) scheme.

So, you met in Kaduna?

Yes, and after that I didn’t see him for the next three months. He came back later and said the Nigeria External Telecommunication (now NITEL) had offered him a job. According to him, his station would be in Oyo State but he refused and requested to be in Kaduna because of me. That was how we started.

Does he have a pet name for you?

He calls you by your first name?

Then, he did. But now he calls me Mama Kabiru.

What do you call him?

I used to call him ‘Brother’ when we started. He said he is not my brother, that he is my friend and my husband. When we got married, we had Kabiru. So, I have been calling him Baba Kabiru since. We don’t have any pet name.

What is his favourite dish?

He doesn’t have one. He eats anything I prepare for him.

Looking at his projects as the Governor of the State of Osun, which of them do you like most?

The one I like most is the infrastructural development, the road, building of new schools, health care for the children, upgrading the environment and all the others because they are all centered on the people he is serving.

Yes, they are fantastic and are uplifting the State of Osun and the live of its people.

What would you advise him on governance if you were asked?

There is nothing than to tell him to continue to give his best to the people of the state. My concern now is for him to complete what he has started.

There is no area you think you can tell him to improve on?

I don’t think so. He is doing everything at once. If he asked me from day one, I would have asked him to start one and finish it before embarking on another. But I think politics is not like that. It is about doing everything at a time. When they see the infrastructure, agriculture, schools, and all are going on at the same time, they say you are doing well. You can see that even if I would have to advise him on governance, it would not go right.

Unlike many other first ladies, you don’t jump around to make noise about yourself and your pet projects. Is this the way you like it or it was by Ogbeni’s design?

First and foremost, let me correct the impression about the fact that others go up and down. There is no role for any first lady. We were not voted for, so there is no Office of the First Lady. The role of the first lady is to take care of the home front; take care of the governor, the family, his visitors and anything that has to do with the Government House. You can see that even if a first lady is doing a particular programme, it is just to keep herself moving so that she does not sit at home doing nothing and get bored. Two, I didn’t blame others who do projects. I do projects too in my own capacity, but in a very low key. There is no point making noise about it because even when you are not making noise, people would still know and they would refer to it.

Is that your decision or that is the way your husband wants it?

It is my own life. I like being simple.

Given the experience you and your husband had in pursuing his political ambition, would you encourage any of your children to go into politics?

What if they have interest and they are so passionate about it like their father?

That would be based on their own personal decision. But if they want my advice, I would tell them not to venture into anything called politics.

Man Kills His Fiancée And Deposited Her Body In A Bin