The Philippine Supreme Court chief justice Chief Justice Maria Sereno, who is the first woman to lead the Supreme Court has rejected calls for her to resign ahead of an impending impeachment, saying that quitting would only expose the judiciary to more attacks. “I will not resign,” she told a forum with cheering supporters, hours…”
Editor
News 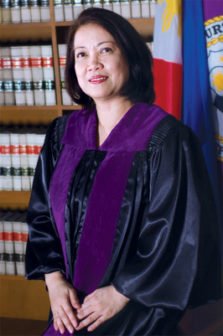 The Philippine Supreme Court chief justice Chief Justice Maria Sereno, who is the first woman to lead the Supreme Court has rejected calls for her to resign ahead of an impending impeachment, saying that quitting would only expose the judiciary to more attacks.

“I will not resign,” she told a forum with cheering supporters, hours after judges and employees of the Supreme Court called for her resignation.

“Resigning from my post as chief justice will only serve to erode the independence of the Supreme Court and embolden those who demand a subservient judiciary,” said Sereno, a critic of President Rodrigo Duterte’s administration.

“To do so would invite the kind of extraconstitutional adventurism that treats legal rights and procedures like mere inconveniences that should be set aside when it suits the powers that be,” she added.

In calling for Sereno’s resignation, the Supreme Court judges and employees lamented that the impeachment proceedings at the House of Representatives had already “put the entire judiciary in disrepute, thereby affecting the honour and integrity of its justices.”

“Chief, it is time to let go,” they said in a statement read at the flag-raising ceremony at the Supreme Court, where many employees wore red.

“Please let the judiciary move on.”

They noted that since the impeachment complaint was filed against Sereno at the House in August 2017, “court officials have been pitted against each other, resulting in a distressing atmosphere.”

“Its officials and personnel … cannot go through another set of hearings and go against each other again at the Senate.”

Sereno said she was saddened that some judges and employees “have succumbed to pressures to enter the political fray.”

She noted that those calling for her resignation only represented four out of 15 judges associations and employees unions in the judiciary.

On Thursday, the House Committee on Justice found probable cause to impeach Sereno.

It was expected to draft articles of impeachment and submit a report to the House plenary this week to be able to schedule a vote.

A one-third vote of the more than 200 members of the House will impeach Sereno, who has gone on leave since March 1 to prepare for a trial at the Senate.

The impeachment complaint against Sereno alleged she failed to declare “exorbitant” lawyer’s fees amounting to 37 million pesos (740,000 dollars) in her statement of assets and liabilities.

It also accused the chief justice of using Supreme Court funds to purchase a car worth 5.1 million pesos, higher than its market value of 4.5 million pesos, for her personal use.

Sereno, who has denied the charges against her, has drawn the ire of Duterte for criticizing his administration’s campaign against illegal drugs and his declaration of martial law in the southern region of Mindanao.