Gov. Kashim Shettima of Borno, has advised governors in the country to stop pilfering from the public treasury with the aim of accumulating wealth. Instead, he urged them to focus on enhancing the well-being of the masses. The governor gave the advice on Tuesday in Abuja at the 2017 graduation of Internally Displaced Girls under…”
Editor
Economy featured News Politics 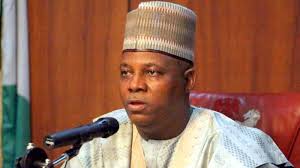 Gov. Kashim Shettima of Borno, has advised governors in the country to stop pilfering from the public treasury with the aim of accumulating wealth.

Instead, he urged them to focus on enhancing the well-being of the masses.

The governor gave the advice on Tuesday in Abuja at the 2017 graduation of Internally Displaced Girls under the Organisation of Female Students Scholarship Scheme.

The 73 graduating girls were sponsored by the Girl Child Concern (GCC), a Non-Governmental Organisation (NGO), in collaboration with the Borno Government, and were selected in from secondary schools in five Northern states.

“The most important yard stick has to do with the quality of governance; there is more to leadership than primitive capital accumulation.

“No matter how much you accumulate beyond a certain point, it’s just a number,” the governor said.

He said that unless something was done fast to address the plight of the common man, “what awaits the country will be worse than the Boko Haram insurgency”.

According to him, this is violence that cannot be separated from poverty, and a hopeless, jobless, ill-educated and ill-paid young man is the most dangerous.

Shettima stated that it was the responsibility of governors to enthrone good governance by “wearing their thinking caps” and working for the people.

He, therefore, stressed the need for governors to create more jobs, invest in education and create work space and work stations for the next generation of youths.

He said that there was nothing special about oil as it would soon go into extinction, noting that human resources was the most important and should be developed.

The governor, however, said that there was need for Nigerians to unite to fight the country´s common challenges.

He noted that women and children bore the brunt of insurgency, adding that the Boko Haram sect had so far created 54,911 widows and 52,311 orphans in the state.

This, he said, was according to World Bank, European Union and the Presidency’s official figures.

“The truth is that we either take care of these orphans or 10 years to fifteen years from now, they will be the monsters that will drive us out of this land,” he said.

According to the governor, some elite and political bigwigs are already afraid of visiting rural areas to meet with common men for fear of being molested.

He added that there was presently a palpable content against the elite glaring on the faces of most common men.

He decried the state of public schools in the country, particularly in the North, saying that security and feeding in most of the schools was nothing to write home about.

Shettima stressed that unless the country´s leadership began to think toward improving the lot of the common man and working for the people, the situation would deteriorate.

Earlier, Dr Mairo Mandara, Executive Director of the GCC, said the girls were another success story of the country´s fight against insurgency.

This, she said, was so because the girls dared where others failed and got what others were abducted for.

Mandara described the girls as “a cohort of brave, fearless, active and informed girl mentors” empowered with life skills who would encourage others to remain in school.

She added that the centre had concluded plans to establish a Girls´ Academy in Borno with learning activities taking off in September, 2017.

Mandara said that GCC was also setting up a skills acquisition centre for teaching construction skills in collaboration with King Muhammad VI of Morocco.

She said that Borno Government had already provided a land for the project, adding that discussions for the setting up of the centre had reached advanced stage.

Most of the girls who spoke to NAN expressed happiness on their freedom and graduation and prayed to God to bless the GCC and Borno Government.

Many Problems Plaguing The NHIS