Irked by the activities of Indigenous People of Biafra (IPOB), the South East Peoples Assembly (SEPA), has asked the Federal High Court, Abuja, to revoke the bail granted to Mr. Nnamdi Kanu, a pro-secession leader. IPOB in collaboration with other groups, on Tuesday, organised a successful sit-at-home in South East, an action SEPA regards as…”
Yusuf
News 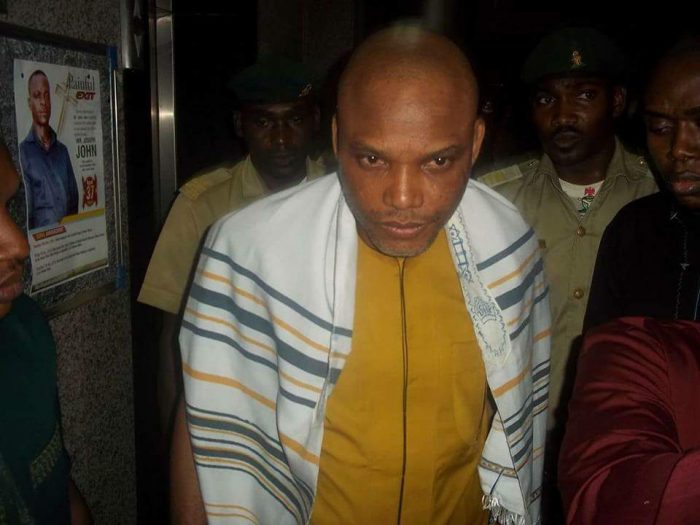 Irked by the activities of Indigenous People of Biafra (IPOB), the South East Peoples Assembly (SEPA), has asked the Federal High Court, Abuja, to revoke the bail granted to Mr. Nnamdi Kanu, a pro-secession leader.

IPOB in collaboration with other groups, on Tuesday, organised a successful sit-at-home in South East, an action SEPA regards as a breach of the bail conditions granted Kanu.

Kanu, the leader of IPOB, has been facing trial for treason and terrorism, is a major sponsor for the secession of South East from Nigeria on the platform of IPOB.

He was arrested on October 15, 2015, in Lagos and eventually granted bail in May this year with some conditions.

The Federal High Court, Abuja, admitted him to bail on health grounds.

Justice Binta Nyako said that she was convinced that Kanu was ill and needed more medical attention than the Nigerian Prisons was giving him.

She, however, ordered that while on bail, Kanu must not hold any rallies, grant any interviews or be in a crowd of more than 10 people.

Nyako gave other bail conditions to include three sureties in the sum of N100 million each.

The judge further ordered that Kanu must deposit both his Nigerian and British passports with the court and that a report on the progress of his health must be made available to her on a monthly basis.

She adjourned the matter till July 11 and 12, for the definite commencement of trial.

However, SEPA has accused Kanu of infringing on the bail conditions.

In a letter to the Chief Judge of the High Court, Justice Ibrahim Auta, the President of SEPA, Prince Chukwuemeka Okoriein,  as the court, as a matter of urgency, to revoke Kanu’s bail.

He said that Kanu has continued to conduct himself in a manner that was totally at variance with terms and conditions of his bail.

He listed the infractions to include holding rallies, grant of interviews or be in a crowd of more than 10 people.

“Obviously, the recklessness with which he made media statements and even organised the ‘Sit at Home and Stay Indoor’ protest to mark the so-called BIAFRA HEROS DAY on Tuesday, 30th May, 2017 is a threat to the unity, security and peace of Nigeria as a sovereign nation.

“We have no iota of doubt that he is trying to push our dear country Nigeria into an unnecessary precarious situation for his personal agenda and those of his paymasters.

“Sir, our decision to write this demand letter to your good office at this time is to forestall another civil unrest in Nigeria, particularly around the Igbo speaking region.

“As you well know, the struggle by Kanu to be relevant under the guise of actualization of Biafra does not enjoy the support of right thinking Igbo people both at home and in the diaspora.

“That he suddenly addresses himself as the Supreme Leader of Biafra points to how arrogant and disrespectful he is to legitimately constitute authority in the Federal Republic of Nigeria.

“The pertinent question on our minds as stakeholders is: Has Kanu been consistent in providing the court with reports on the progress of his health and treatment on a monthly basis since he was granted bail?

“We fear that if Kanu is not tamed by Your Lordship as a matter of urgency, the IPOB may create a situation where it becomes difficult if not impossible for genuine development to take place in the South East under the administration of President Muhammadu Buhari.”

“History has taught us that the Civil War of 1967-1970 started gradually and later turned out to be something that caused our people unimaginable losses.

“We cannot afford to fold our arms this time and allow a stooge imported from the United Kingdom by stark enemies of Nigeria to maintain a state of belligerence against the nation and keep the name of Igbo people in the news for the wrong reasons.”

TRACE To Curb Reckless Driving By Tanker Drivers In Ogun