Looks like some folks are looking for reasons to remove the new president from office. Read the report from Washington Post, who first broke the story below… President Trump revealed highly classified information to the Russian foreign minister and ambassador in a White House meeting last week, according to current and former U.S. officials, who…”
Editor
News 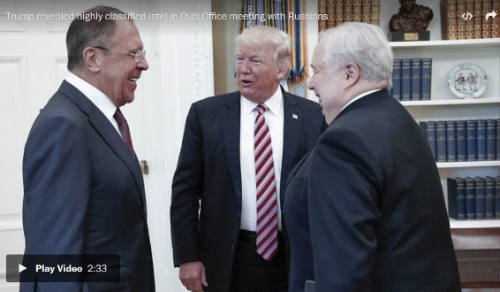 Looks like some folks are looking for reasons to remove the new president from office. Read the report from Washington Post, who first broke the story below…

President Trump revealed highly classified information to the Russian foreign minister and ambassador in a White House meeting last week, according to current and former U.S. officials, who said Trump’s disclosures jeopardized a critical source of intelligence on the Islamic State.

The information the president relayed had been provided by a U.S. partner through an intelligence-sharing arrangement considered so sensitive that details have been withheld from allies and tightly restricted even within the U.S. government, officials said.

The partner had not given the United States permission to share the material with Russia, and officials said Trump’s decision to do so endangers cooperation from an ally that has access to the inner workings of the Islamic State. After Trump’s meeting, senior White House officials took steps to contain the damage, placing calls to the CIA and the National Security Agency.

“This is code-word information,” said a U.S. official familiar with the matter, using terminology that refers to one of the highest classification levels used by American spy agencies. Trump “revealed more information to the Russian ambassador than we have shared with our own allies.”

The revelation comes as the president faces rising legal and political pressure on multiple Russia-related fronts. Last week, he fired FBI Director James B. Comey in the midst of a bureau investigation into possible links between the Trump campaign and Moscow. Trump’s subsequent admission that his decision was driven by “this Russia thing” was seen by critics as attempted obstruction of justice.

One day after dismissing Comey, Trump welcomed Russian Foreign Minister Sergei Lavrov and Ambassador Sergey Kislyak — a key figure in earlier Russia controversies — into the Oval Office. It was during that meeting, officials said, that Trump went off script and began describing details of an Islamic State terrorist threat related to the use of laptop computers on aircraft.

For almost anyone in government, discussing such matters with an adversary would be illegal. As president, Trump has broad authority to declassify government secrets, making it unlikely that his disclosures broke the law.
White House officials involved in the meeting said Trump discussed only shared concerns about terrorism.
“The president and the foreign minister reviewed common threats from terrorist organizations to include threats to aviation,” said H.R. McMaster, the national security adviser, who participated in the meeting. “At no time were any intelligence sources or methods discussed, and no military operations were disclosed that were not already known publicly.”
McMaster reiterated his statement in a subsequent appearance at the White House on Monday and described the Washington Post story as “false,” but did not take any questions.
In their statements, White House officials emphasized that Trump had not discussed specific intelligence sources and methods, rather than addressing whether he had disclosed information drawn from sensitive sources.
The CIA declined to comment, and the NSA did not respond to requests for comment.
But officials expressed concern about Trump’s handling of sensitive information as well as his grasp of the potential consequences. Exposure of an intelligence stream that has provided critical insight into the Islamic State, they said, could hinder the United States’ and its allies’ ability to detect future threats.