Salah, Kane nominated for Player of the Year 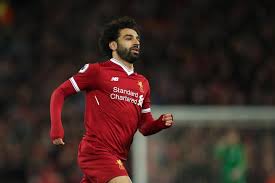 Despite blowing the chance to seal the Premier League title in a thrilling 3-2 derby defeat to Manchester United last weekend, City still boast a 13-point lead at the top of the table heading into Saturday’s match against Tottenham.

De Bruyne is expected to be City’s leading candidate having contributed a league-high 15 assists and seven goals from midfield as Pep Guardiola’s have marched towards the title.

However, the Belgian may be beaten to the award by Salah’s free-scoring form.

The Egyptian has scored 39 times in all competitions, including in each leg as Liverpool dumped City out of the Champions League quarter-finals 5-1 on aggregate.

Salah leads the way in the race for the Premier League golden boot with 29 goals to Kane’s 25.

Sane and Kane are also on the shortlist for the Young Player of the Year award alongside City goalkeeper Ederson and forward Raheem Sterling, Manchester United striker Marcus Rashford and left-back Ryan Sessegnon, who has starred in Fulham’s push for promotion from the Championship.