China and Russia began naval drills near North Korea on Monday amid continuing tensions over the isolated state’s nuclear ambitions and ahead of a United Nations General Assembly meeting this week, where North Korea is likely to loom large. North Korea launched a missile over Japan last Friday, its second in the past three weeks,…”
Yusuf
News World News 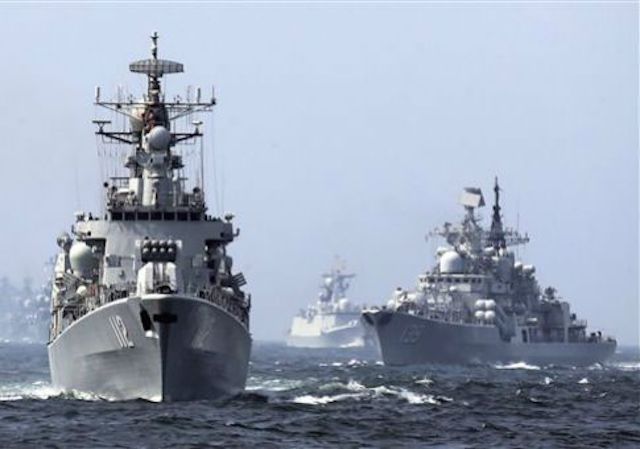 China and Russia began naval drills near North Korea on Monday amid continuing tensions over the isolated state’s nuclear ambitions and ahead of a United Nations General Assembly meeting this week, where North Korea is likely to loom large.

North Korea launched a missile over Japan last Friday, its second in the past three weeks, and conducted its sixth and by far most powerful nuclear test on Sept. 3, in defiance of international pressure.

The official Xinhua news agency said the joint exercises will take place between Peter the Great Bay, just outside of the Russian far eastern port of Vladivostok, not far from the Russia-North Korea border, and into the southern part of the Sea of Okhotsk, to the north of Japan.

The drills are the second part of China-Russian naval exercises this year, the first part of which took place in the Baltic in July. The report did not directly link the drills to current tensions over North Korea.

According to TASS, Russia and China will deploy 11 ships and two submarines during the drill that will run till 26 September.

Russia will send the Admiral Tributs Udaloy-class destroyer, the Sovershenny corvette and the Igor Belousov rescue ship, carrying the AS-40 deep-submergence rescue vehicle and the R-11 missile corvette. In addition, the Pacific Fleet will also be represented by the Sovetskaya Gavan Grisha-class corvette, the Viktor Faleyev hydrographic survey vessel, the MB-93 sea tug and two diesel-electric submarines that were not named.

The four-vessel Chinese task force will be led by the Shijiazhuang destroyer.

“In addition, the naval phase of the exercise will involve the training of ship-aircraft coordination. This element will involve two Il-38 planes, two Tu-142M3 planes, a Ka-27PS and a Ka-27 helicopters of the Pacific Fleet’s naval aviation. The aviation of the Chinese Navy will be represented by Z-9C and Z-9D shipborne helicopters,” Matveyev said.

Both China and Russia have repeatedly called for a peaceful solution and talks to resolve the North Korean issue.

The international community must remain united and enforce sanctions against North Korea after its repeated launch of ballistic missiles, Japanese Prime Minister Shinzo Abe said in an editorial published in the New York Times on Sunday.

Such tests are in violation of U.N. Security Council resolutions and show that North Korea can now target the United States or Europe, Abe said.

Diplomacy and dialogue will not work with North Korea and concerted pressure by the entire international community is essential to tackle the threats posed by North Korea, Abe wrote.

A week ago, the 15-member U.N. Security Council unanimously adopted its ninth sanctions resolution since 2006 over North Korea’s nuclear and ballistic missile programmes.

On Monday, the official China Daily said sanctions should be given time to bite but that the door must be left open to talks.

“With its Friday missile launch, Pyongyang wanted to give the impression that sanctions will not work. Some people have fallen for that and immediately echoed the suggestion, pointing to the failure of past sanctions to achieve their purpose,” it said in an editorial.

“But that past sanctions did not work does not mean they will not. It is too early to claim failure because the latest sanctions have hardly begun to take effect. Giving the sanctions time to bite is the best way to make Pyongyang reconsider.”

Pyongyang has launched dozens of missiles as it accelerates a weapons programme designed to provide the ability to target the United States with a powerful, nuclear-tipped missile.

North Korea said on Saturday it aimed to reach an “equilibrium” of military force with the United States.