Ismaeel Uthman THE October 15 local government election in the State of Osun might further widen the cracks in the All Progressives Congress (APC).  OSUN DEFENDER noted that the consensus arraignment adopted by the leadership of the APC to choose the chairmanship and councillorship candidates of the party for the local government election is…”
Yusuf
featured hero Osun Politics 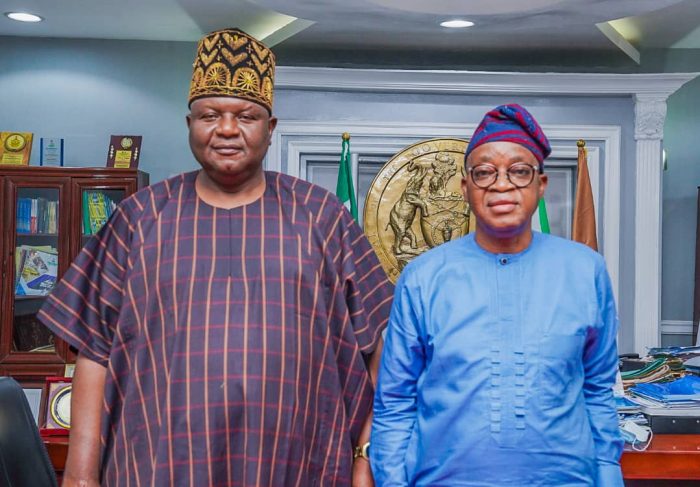 THE October 15 local government election in the State of Osun might further widen the cracks in the All Progressives Congress (APC).

OSUN DEFENDER noted that the consensus arraignment adopted by the leadership of the APC to choose the chairmanship and councillorship candidates of the party for the local government election is causing ripples in the party.

It is believed that whoever is chosen as the candidate of the party will automatically win the election in his or her ward or local government.

Some members of the party, particularly in Osun West and Osun Central senatorial districts, have alleged the party leadership of imposition.

Calling for primary election, the aggrieved APC members urged the party to be fair to all the chairmanship and councillorship aspirants to safeguard the future of the party.

However, OSUN DEFENDER observed that the grievances of the party members is majorly on the return of current caretaker chairmen in some local governments, against the zoning arraignment in the affected areas.

The councillorship ticket does not attract much criticism like the chairmanship, it was noted.

Some of the aggrieved APC members had taken to the street to protest the alleged imposition of candidates in their various local governments.

Aside the APC members, some communities have also rejected the choice of the party on the council chairmanship, warning that the zoning arraignment should not be jettisoned.

Members of the Board of Trustees of the Ifon-Orolu Progressives Union and the Olufon in Council have cautioned Governor Adegboyega Oyetola and the state Chairman of the APC, Prince Gboyega Famodun, on the choice of Prince Adekunle Benson as the candidate of the party in Orolu local government.

The community rejected Benson’s candidature on the ground that he does not deserved to be returned because of his reported nonperformance.

According to the community in a statement signed by the Publicity Secretary of the IPU, Prince Jide Akinyooye, imposition of Benson might be the end of the APC in the community and the local government.

The statement reads in part: “We must be frank sir at this time to say we are constrained to call the attention of Governor Adegboyega Oyetola and the Osun State leadership of the All Progressive Congress (APC) to ongoing political show-of-shame where a few bad eggs among the Orolu political leaders and a former State legislator are tactically deploying every means possible to manipulate the forthcoming APC party primary election towards re-presenting Hon. Benson Adekunle Adesina as the chairmanship candidate of the ruling party on the pretense that such an agenda was a special assignment by Mr. Governor and the top echelon of the ruling APC at the state level.

“We will also like to remind you that the people of the ancient town of Ifon Orolu have consistently rejected the same Hon. Benson Adekunle Adesina on his account of poor performance, lack of respect for the community leaders and lack of transparency among other social and political vices he has been committing repeatedly while he serves.

“Coincidentally, the personal interest of these political gladiators in our incumbent Caretaker Chairman that is seeking to occupy the same seat for the fourth time is being mistakenly projected as if there are no other competent hands in our dear town than this failed chairman.

“The clear indication to Orolu people as revealed by Hon. Benson Adekunle administration is that Orolu Local Government cannot grow under his watch, hence the reason why he must be substituted with a credible hand this time around.

“It is not ideal for the State leadership of APC to allow evil agenda against the will of Orolu majority such as perceived imposition in the name of purported loyalty, after all, a repeated dirty slap they say causes blurry vision and once bitten twice shy they say.”

Echoing the same call, the Eesa of Ifon-Orolu and Head of the kingmakers, Chief Babatunde Oyetunji, said the rejection of Benson was a unanimous decision of the community and its people.

Oyetunji said: “The entire Ifon-Osun community is against Benson. He is not fit to be Chairman. If APC uses power to impose him on us, when the problem arises, that may be the cause of other problems for Oyetola’s government.”

Some members of the APC in Irepodun South Local Council Development Area of Osun state have also protested the choice of Hon. Kamalideen Oloyede popularly known as Jay Kay as the candidate of the party.

The aggrieved APC members, on Thursday, marched peacefully to the palace of Elerin of Erin-Osun to prevail on the traditional ruler and leaders of the APC not to impose Oloyede on them in the coming local government election.

Oloyede is the current Caretaker Chairman of the LCDA and he has been on the seat since its creation seven years ago, said the protesters.

Speaking to journalists, one of the stakeholders in Irepodun South LCDA, Opeyemi Kamilu, said that the protest was to express their discontentment over the alleged endorsement of Oloyede by the Governor Oyetola and the party leadership in the state.

Some leaders of the APC in Osogbo South LCDA has issued a stern warning against imposition of any of the chairmanship aspirants as candidate of the party, noting that such move would shrink the winning strength of the party.

Rising from a meeting with chairmanship aspirants in the LCDA on Wednesday, the APC leaders said imposition of candidate does not advance the cause of democracy.

The leaders said there will be no room for sentiment or favoritism when it comes to picking the candidate who will contest under the party.

They said: “Imposing any candidate over other aspirants in the forthcoming local government exercise will not help us to advance democratically.

“The will of the generality of the people should be taken so serious, if otherwise, the aspirants should go to primary”.

One of the aspirants, Alh. Ibrahim Adekunle Moroof, who spoke with newsmen after the meeting said: “The polity in our local government should not be a matter of rotating particular offices in the name of friendship. The leaders assured us normal process will be considered to avoid lopsided, sentiment and crossing of rubicon by any aspirant”.

There was also protest in Olorunda local government on the choice of the chairmanship candidate of the party.

The women wing of the APC, on Tuesday, protested the alleged imposition of the current Caretaker Chairman of the local government, Hon. Kunle Kudaisi, as the candidate of the party in the forthcoming election.

According to the women, the party adopted favouritism in selecting candidates for the local government election.

They threatened to protest naked if the APC leadership failed to yield to their request.

“We are from Olorunda local government and we are here to protest and beg the governor. All what is happening is not to our satisfaction and we don’t want to be a part of it.

“We the women of Olorunda don’t want K.K, why him? We are not satisfied by that decision and this punishment is not ok. We don’t want the person forced on us, we don’t want him.

“The party is not following the normal procedures and they are engaging in favouritism in the selection of candidate for the election. They can’t impose someone on us.

“If the governor turns a deaf ear to what we’re saying, we women will stop voting and we will stop attending meetings in Olorunda. We will chase them out of government by going naked”.

This is just as some chairmanship aspirants in Olorunda North Local Council Development Area kicked against the consensus arrangement by leaders of the party.

Some of the aspirants, including the incumbent Vice Chairman of the local government, Hon. Sakirat Adeoye, and an entrepreneur, Prince Adeshina Olasupo, said the idea of consensus was to shut out some aspirants and force someone on the people.

Speaking with newsmen on Wednesday, the aspirants disclosed that some APC leaders in the local government have come up with zoning formula to sideline some of them and give room for their preferred candidate.

The aspirants described the said rotation arrangement as a ruse and figment of the imagination of those who are scared of primary election to select the APC chairmanship candidate in the local government.

Reacting to the development, Famodun, the Chairman of the APC, said the party was not imposing any candidate on the people.

Reacting through his Media Assistant, Mr. Kola Olabisi, Famodun said: “The series of protests on the tickets of the party for the local government election shows that our party, the APC is viable. Members will not be fighting for a ticket in a crippled political party. Protest is a normal thing in a functioning political party.

“I am not aware of any imposition of candidate.”