Royal Wedding: Meghan and Harry Remains the Talk of the World

Details have emerged from the star-studded evening reception to celebrate the marriage of the Duke and Duchess of Sussex. The world watched as Harry and Meghan tied the knot at St George’s Chapel at Windsor Castle in front of guests including the Queen, more than 30 royals and Hollywood royalty including Oprah Winfrey, Serena Williams,…”
Editor
Entertainment 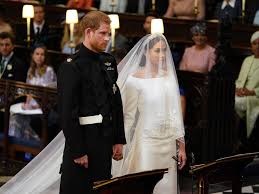 Details have emerged from the star-studded evening reception to celebrate the marriage of the Duke and Duchess of Sussex.

The world watched as Harry and Meghan tied the knot at St George’s Chapel at Windsor Castle in front of guests including the Queen, more than 30 royals and Hollywood royalty including Oprah Winfrey, Serena Williams, the Clooneys and the Beckhams.

More than 100,000 people turned out to see the couple ride through Windsor in an open-top carriage before a lunchtime reception with 600 guests in St George’s Hall hosted by the Queen, which included a performance by Sir Elton John.

Later, the couple changed for an evening reception with 200 guests at nearby Frogmore House hosted by Prince Charles.

For the black-tie do, Meghan changed from wedding gown designed by Clare Waight Keller for Givenchy, to a lily white halter neck by Stella McCartney.

She was spotted wearing an emerald cut aquamarine ring which belonged to Diana, Princess of Wales – believed to be a poignant wedding day gift from Harry.

Harry drove his new wife from Windsor Castle in a silver blue classic convertible Jaguar E-Type Concept Zero with a number plate bearing the date of the wedding – E190518.

The car was originally manufactured in 1968 and has been converted to electric power.

The newlyweds were joined by 200 guests at the glamorous reception, reportedly compered by James Corden.

The evening reportedly included a speech by Prince Charles in which he spoke about feeding Harry a bottle and changing his nappy, before culminating in a huge firework display that lit up the sky.

On Sunday morning, the Queen left Windsor Castle to go to church.

Earlier, the Royal family thanked all those who had enjoyed the wedding, tweeting: “Thank you to everyone who came to Windsor and those who followed from around the UK, the Commonwealth, and the world today. Congratulations once again to the newly-married Duke and Duchess of Sussex. #royalwedding.”

Mulroney, whose seven-year-old twins were the page boys who carried Meghan’s veil into St George’s Chapel, posted a picture of the bride walking up the steps of St George’s Chapel with her sons, saying: “Proud friend. Proud mom.”

And Chopra said the wedding “stood for change and hope.”

Describing her friend as “the epitome of grace, love and beauty”, she wrote: “Every choice made at this wedding by you both will go down in history, not just because it was your wedding but because this incredible wedding stood for change and hope. Both things that the world needs desperately.”

It’s thought the couple won’t immediately leave for their honeymoon but will stay in the UK for a while, though it is rumoured they may spend a few days in Ireland.
On Tuesday they will join Charles and Camilla on the lawns of Buckingham Palace for a Prince of Wales 70th Birthday Patronage Celebration.