Super Eagles manager, Gernot Rohr will be one of the over 40,000 spectators expected to throng the 41,458-capacity. The Nouveau Stade de Bordeaux tonight for the Europa League second leg, second qualifying game between Girondin Bordeaux and the visiting Latvian side, FK Ventspils. Rohr, a former Bordeaux player, according to reports is back at his former…”
Yusuf
Sports 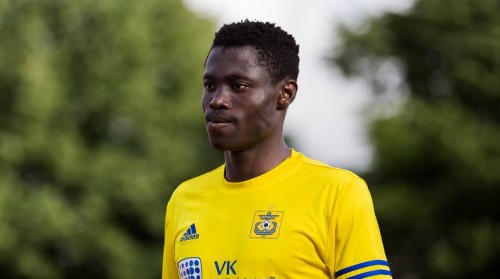 Super Eagles manager, Gernot Rohr will be one of the over 40,000 spectators expected to throng the 41,458-capacity.

Rohr, a former Bordeaux player, according to reports is back at his former club to run the rule over three Nigerian players plying their trade with FK Ventspils, especially their 20 year-old striker, Adeleke Akinyemi who scored six goals in two Europa League games last month.

Akinyemi,who was 20 last June scored four of the five goals FK Ventspils when they hosted Albanian side, Luftëtari FC in the first leg of their Europa League tie on June 12 while the fifth goal was also scored by another Nigerian,Tosin Aiyegun.

In the return leg, Akinyemi scored a brace while midfielder,Abdullahi Alfa scored the third for Ventspils to end scores 3-3 and ensured his club qualified to meet Bordeaux 8-3 on aggregate.

In the reverse fixture last week,the six-times Latvian champion lost 1-0 to the visitors with all three Nigerians in action.

Coach Dejan Vukicevic will be banking on his Nigerian imports to produce the magic that saw them hit eight goals in just two goals last month in the same competition while Rohr will be seeking to add new players to his squad ahead of the 2019 Africa Cup of Nations qualifying game in September against Seychelles.

Masudi Djuma Is A Man On A Mission, Q And A

Sharapova Has Made An Impressive Start In Tianjin Opener