BY WALE BOLORUNDURO GOVERNOR Gboyega Oyetola has continued to allow some of his men to divide the APC Osun further, judging from the recent official statements from them.  Last week, when the former Director General of Debt Management Office in the state,Tunde Adejumo, issued that abominable official statement, that Oyetola inherited over N200bn debt…”
Yusuf
featured hero Op-Ed 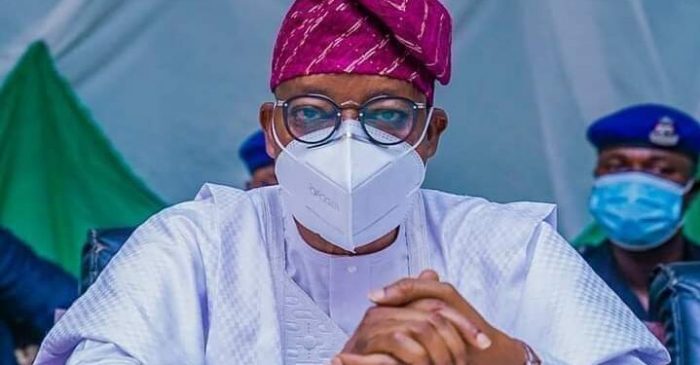 GOVERNOR Gboyega Oyetola has continued to allow some of his men to divide the APC Osun further, judging from the recent official statements from them.

Last week, when the former Director General of Debt Management Office in the state,Tunde Adejumo, issued that abominable official statement, that Oyetola inherited over N200bn debt instead of the N141bn domestic debt previously confirmed by Oyetola himself, as “Governor-in-waiting”, and the external subsidiary debt of N30bn. I quickly exposed them in my press release dated 18th March, 2022 that they are looking for a “fudge amount” of over N30bn to embarrass the current governor. Unfortunately, and to the chagrin of everybody, all the “strange items”, Tunde Adejumo wants to add to the public debt of Osun to arrive at “over N200bn” have no figures or amounts attached to them. Not a single one, despite his fruitless efforts of releasing two statements on this flippant claim in the last one week.

Tunde Adejumo has chosen the path of perdition to embarrass Governor Oyetola. In addition, there is no accounting standard, mentioned to back this misadventure, in a cash-based government accounting since many states are yet to adopt accrual based IPSA. All his theories are based on jaundiced online collections and qualification that lack rigorous academic disciplines that are learned full time in the classrooms of world class institutions and through work experiences.

To my friends, I predicted two things: that the government of Oyetola would come out to disown the DMO DG’s frivolous claim and that he would send emissaries to apologise to me.

True to my first prediction, the Commissioner for Finance, Bola Oyebamiji, who is known to be evasive on issues especially state matters, was the one who issued a press release on the 19th March.  The press release was hollow, colourless and dissembling, but laced with contentious statements to atone for his sin to his former boss, Ogbeni Aregbesola , who brought him into public office. It was the same Oyebamiji that led on Aregbesola’s associates on the political entrapment that later became an albatross for our dear party, APC, in Osun, when Oyetola was to succeed Aregbesola in the middle of 2018’s “West Lokan” agitation and primary election. So where is the moral ground for Oyebamiji to stand on and point finger to the wide gorge, per-mutated and created by him between Oyetola and the predecessor, and their respective followers. Oyebamiji is not only the beginning of the conundrum we have found ourselves in Osun APC, he is the testament and only God knows, how long the movie on mischief, perfidy and power play will last.

That Oyebamji’s statement was silent on the subject matter, could mean a “volte-face” on the taunted misguided adventure of “sexing up” the inherited debt balance by his direct report, Tunde Adejumo. That is, Oyebamiji has surreptitiously disowned Tunde Adejumo. It could also mean Oyebamiji is buying time, waiting for his hatchet man to fabricate figures for the “many strange items”. We will expose him further. However, if you analyze their two press statements, the grammatical structures, the idiosyncrasies and the semantics, obviously, the same person wrote the two press statements. Yet, their figures are different, that shows the dishonesty and the abysmal level which they are leading the Governor to in Osun because of the rat race of nailing Oyetola’s predecessor. It will be good to reply Oyebamiji in a way similar to his press statement.

To start with, Oyebamiji used subterfuge to tell his story on the status of the road projects inherited, without telling us the initial percentage of completion, when bequeathed to their administration. He has forgotten that their Commissioner for Works and Transport had earlier mentioned that Gbongan-Akoda road was inherited at 30 per cent completion, so in three and half years, they have only added 10 percent. Similarly, Oba Adesoji Aderemi dual carriage road was at 52 per cent when Aregbesola left, but the Oyetola’s administration has converted it to single carriageway. So, Oyebamiji’s 23 percent addition, was it based on the new scope of work or what? Oyebamiji cannot be comparing an Orange with Apple in civilisation. Osogbo (Old Garage)- Ikirun- Kwara boundary was at 50 percent when Aregbesola left, Oyetola’s efforts in three and half years have only added less than 10 per cent. As much as I have not jumped six (6) feet pole for the current Osun administration on inherited projects, I have also restrained myself from commenting before now, so why is Oyebamiji craving my pen’s trouble on inherited projects? My previous observation on issues other than the status of inherited projects is not personal or expression of issue with Governor Oyetola. I have congratulated him, twice on the increased in IGR by sending personal messages to him and by asking him to take the glory on this. I know at the beginning of this smear campaign against Aregbesola, I had reached out severally to him to “rein in”, his followers and not to allow the house to be divided by sycophants. My ombudsman’s role has been misinterpreted as “currying his face”. The rest is history.

Making Oyetola a governor means surrendering our choices to him to make on our behalf, either good or bad. Therefore, I have no beef with the abandonment of projects by the current governor of Osun or his “lack of skin” in the inherited projects. It is his choice, but using the debt that can be refinanced or restructured as an excuse for the choice is a profanity (with due respect) for a government, headed by a man, who was the Chief of Staff for eight years of Aregbesola. At this stage, I pray, I will not be compelled to comment further, on the inherited road projects, no matter how provocative Oyebamiji and others are.

In addition, the claim by Oyebamiji that the state’s revenues including IGR figures are available is a cheap lie because the state has never published its audited financial statements in any newspapers in the recent times. So, if you cannot find it on the official website of the state; what is the definition of public domain used by the Commissioner? His statement in this regard is puerile and nobody should take him serious on disclosure and accountability expected from any public servant. Apart from the 2020 press release on the auditor’s statement (summary of audit), which gave the IGR figures for 2019 and 2020, nothing was ever heard before and after the press release from the State Auditor-General.

Three months after the end of 2021, nothing has been heard of the IGR figure of the state for 2021. The question is: why do we have to wait for secondary sources (DMO in Abuja, NBS, BudgIT) before we know the financial status of our state, Osun. For the past 22 years, VAT revenues have always been part of the revenues from federation accounts. Some states do place their direct deductions via ISPO on their VAT revenues. FAAC at the federal level always bundles statutory revenues and VAT in their reporting of monthly allocation. So, nobody knows the intention of removing VAT revenue from monthly receipt of the state from the federation accounts by Oyebamiji. If it is to confuse us on their claim of negative receipt only, that is fine; we know if we add the N400m or N500m VAT revenue back, it  is not negative again and that is bone-head arithmetic. Since not even the devil knows the intent of man, we will have to be sure of what will become of the VAT revenue in the near future.

Furthermore, Oyebamiji claimed they have not approached any financial entity for facility. I have not mentioned any commercial transaction in my writing (even when I know some in existence), I have mentioned FGN Budget support that has capacity of impacting direct deductions, so the use of financial entity by Oyebamiji is to dissimulate the issue as usual. The budget support facility is from Federal Ministry of Finance, meant for all states and not from a Financial entity. The state has up to six (6) months to draw down this facility. Governor Oyetola has said he has not foreclosed debt as financing source, so there is no need for the Commissioner to grandstand on this or embellish, the issue.

On direct deductions on Osun revenues from federation accounts, I will urge him to do the breakdown of the direct deduction into individual deduction on each of the following debt items bequeathed to the current administration i.e (1) The FGN restructured bond for the states loan (2) External loan (3) CBN backed bailout facility (state portion) (4) CBN – ECA backed Infrastructure loan (5) Budget Support Facility. All the items (except item 5) were created while I was serving either as Commissioner or Adviser between August 2011 and December 2016. I had also confirmed their status continuously till recently from his DG DMO, Osun. Oyebamiji would have to warm up to the challenge of analyzing the direct deduction.

The monthly individual repayment on each debt item is a fixed and equal amount. Once, Oyebamiji supplies, each of them, we can add them up. If the total sum is within the 10 per cent tolerance level, higher than N1.5bn, we will be satisfied. For this to be autographed, it must take care of the state’s usual monthly accounting adjustments and inter agencies settlement to match the state deductions with its revenues. Honestly, if the total sum of monthly repayment is higher than N1.5bn by more than 10 per cent and can be attributed to inherited debt balances, we will honorably leave the issue out of further discussion. To ram the N1.8b direct deductions into our throats is not only disdainful, it is mortally insensitive to our sensibilities, especially when Oyebamiji knows the states were the one that stopped Federal Ministry of Finance from publishing the monthly allocations and direct deductions of each of them as primary source. Oyebamiji is superciliously, saying Osun people are stupid for asking and therefore, they should go and fish out the information on the make-up and the basis of direct deduction, when he knows it doesn’t exist. Oyebamiji is the public accounting officer, the onus of proof is on him to give the required information. Period.