By Sodiq Yusuf         Residents of Baruwa Estate along Gbongan/Ibadan road, Osogbo, State of Osun have decried the deplorable condition of all the roads in the community. The residents, who spoke in separate interviews with OSUN DEFENDER yesterday, said the bad roads need urgent attention. According to them, the road which links Baruwa Estate with Hassan…”
Yusuf
Osun 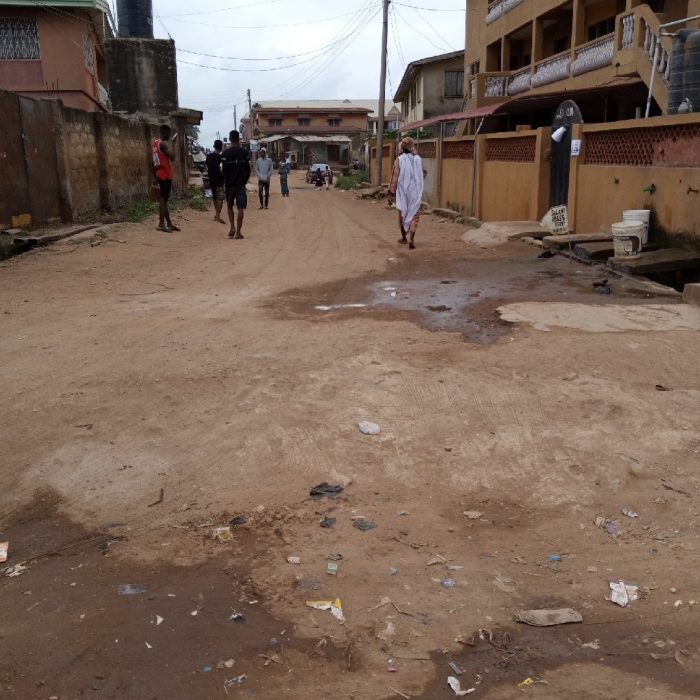 Residents of Baruwa Estate along Gbongan/Ibadan road, Osogbo, State of Osun have decried the deplorable condition of all the roads in the community.

According to them, the road which links Baruwa Estate with Hassan Sunmonu Avenue, Omomeji street, Onirodunnu and other streets in the area is crucial to the economy and the development of the communities.

A community leader, Baba Ola Joe, stated that calls have gone to the government to assist them in constructing the road for the use of residents.

He told OSUN DEFENDER that some residents have resorted to self-help in patching the road in the area, especially the Baruwa stretch.

“During the dry season, it is even worse. Dusts and sand particles consume the whole area. Adults, and children especially, who are exposed to the dust particles all fall sick. “Government should come to our aid. We made passionate appeals to the immediate past administration to consider it for the 10km road per local government it constructed. We know the former Governor and his successor observe their Juma’at at the Anabi L’onigba Central Mosque, located within the estate and they wouldn’t have departed the sacred ground of the mosque without making a promise regarding this problem to the people before God. But fulfilling that promise has become a nightmare.”

Another resident of the area, Mr. Francis Ezediuno explained that the road, if constructed will give a new lease of life to and assist those living in the communities.

“Notwithstanding the hardship, road-wise, being experienced by residents of Baruwa Estate, community efforts are at ttimes put in place to patch some of these streets, especially the lengthy Baruwa Street, which begins at the Gbongan-Ibadan road and terminates at the bank of the Osun River. All we ask is for government to come to our aid. Streets in Baruwa Estate are begging and calling for attention.

“The management of Fingerlicking restaurant has been the one fixing the culvert that connects the entrance to Baruwa Estate and the ever-busy Gbongan-Ibadan road whenever it breaks. Likewise, the above-mentioned mosque has been repairing the culvert that leads to its premises.

“When it rains, the exposed top soil is, as a result of degradation, washed off into drainages by rain water. These drainages get clogged with sand and all other residues and when full, the remnants of water is left to cut across the road thereby creating big gullies.

“Near the popular Eid prayer ground in the Estate, a big gully was cut by rain water, which almost affected the IBEDC transformer installed there. It took effective community efforts to save that part of the road from cutting into two halves and also to save the transformer. Over the years sandbags, cement and other stuffs were used to save a good portion of the road from developing into deep gullies.”