Senate President Bukola Saraki speaks of his Cordial Relationship With President Muhammadu Buhari on Tuesday, Despite the despite false claims in some social media. He made this known when the National Executive of the Islamic group, Jamaatu Izalatul Bidiah Wa Ikamatus Sunnali (JIBWS) led by its President, Mohammed Jingiri visited him at the National Assembly. The President of…”
Yusuf
News 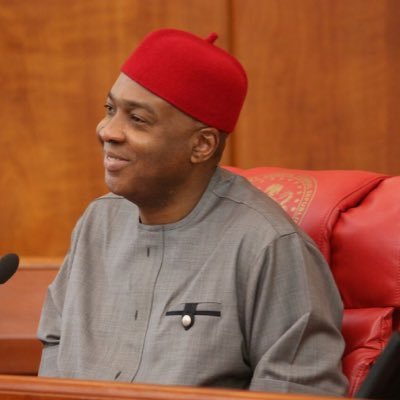 Senate President Bukola Saraki speaks of his Cordial Relationship With President Muhammadu Buhari on Tuesday, Despite the despite false claims in some social media.

He made this known when the National Executive of the Islamic group, Jamaatu Izalatul Bidiah Wa Ikamatus Sunnali (JIBWS) led by its President, Mohammed Jingiri visited him at the National Assembly.
The President of the Senate debunked allegations that he and the Senate are working against President Buhari.
”I want to assure you of the good cooperation between the legislative arm and executive led by President Muhammadu Buhari.
” Since the commencement of this Senate, I think we had about 196 requests from President Buhari for confirmation of his nominees and we have confirmed 185.
“I think, we have only rejected 11. By Mathematics, that is over 90 per cent.
“I want to assure you there is a lot of noise, you will see in the newspapers, radio and social media, please, be assured that the two arms of government are working closely together, more than in past sessions of the Senate.
” In January, I went to see him and assured him of our cooperation and we have continued to work closely.
“I want to assure you as we always say, let us be judged by our actions and not by talk
”I want you to convey the same message to your followers, who because of social media and the fake news they hear over the radio, they get the wrong impression that we in the Senate are working against the President.
I assure you that we have a very cordial relationship with the Executive,” he said.
Saraki also reaffirmed the commitment of the Senate to ensuring good governance, economic stability and creation of jobs for the teeming unemployed youths.
He promised to ensure that all Bills to be passed by the Senate would ensure that religious sentiments of Nigerians were taken into consideration.
The Senate President told the group that the Gender Bill currently before the National Assembly would be fair to all religious groups.
” I want to reassure you on our greatest concern, particularly in the issue of Gender Bill. Here in the National Assembly, we pass laws and whatever law we pass, we take into consideration the religious aspects.
”There is no law that can disregard the religious sentiments of the citizens.
“So, we have discussed that whatever final version of the law that will come for discussion, because it is still for discussion, it is just a proposal, it should not be one that would have a conflict with religion. I want to assure you of that”, he said.
According to him, the final version of the gender bill will be such that all religious sentiments are taken care of and Nigerians would be proud of.
Saraki pledged that the Senate will continue to play its roles by bringing political balancing and stability into consideration.
“We will do what we know is best for this country. We will strive to work to keep this country together”, he said.
Earlier, the leader of the group, Mohammed Jingirr commended the Senate President on his role in the arrangement that led to the rejection of the Muslim-Muslim Presidential ticket for the All Progressives Congress ( APC) in the 2015 presidential elections.
He added that Nigeria was not ripe for such an arrangement, which did not take into consideration the need for religious balance in the country, as all religious interest must be represented at all times, including elections.
According to him, religious balancing must at all times be respected in Nigeria as only this will ensure harmony.
The Islamic cleric also commended the National Assembly for rejecting same-sex marriages and capital punishment, describing them as unIslamic.
He also urged the Senate President to ensure that the current Gender Bill reflects the tenets of all religions.
Sheik Jingiri called on the Senate to ensure equality of representations in political appointments in line with the population of states.
He also called for a cordial relationship between all arms of government for the benefit of the people.
The leader of JIBWS prayed for the quick recovery of President Buhari, who is currently on medical vacation in London.

Buhari On The Way Back To Nigeria From US – Presidency