President Muhammadu Buhari has flagged off the distribution of emergency Agricultural inputs to over three hundred thousand farmers affected by the flood disaster of the year 2020 across Nigeria. President Buhari who is the Chairman national Food Security Council was represented by Kebbi state governor and vice chairman, National Food Security Council, Atiku Bagudu…”
Olamide
Economy News 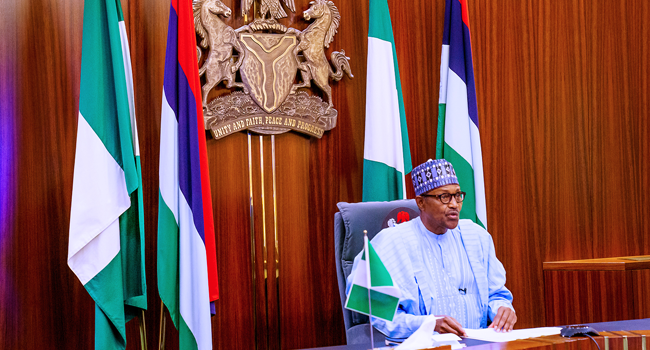 President Muhammadu Buhari has flagged off the distribution of emergency Agricultural inputs to over three hundred thousand farmers affected by the flood disaster of the year 2020 across Nigeria.

The 2020 unfortunate flood incident resulted in the displacement of several communities, damage to infrastructure, destruction of crop lands and widespread environmental dislocation.

President Buhari said the intervention was approved to provide emergency agricultural inputs specifically to further support farmers that lost their crops as a result of the inundation of their farmlands and the cutting off of access to croplands during the flood disaster.

He said it an additional support from the Federal Government through the National Food Security Council under his leadership.

The President said it is important to ensure the successful implementation of this intervention so as to assist farmers with modern farm inputs and seeds that will support their speedy recovery from the disaster impact.

He called on Nigerians to monitor the distribution to ensure the items get to the actual farmers that suffer lost during the devastating flooding.

According to him non governmental organisation, faith based organisation, community leaders, youth groups and the media are expected to ensure the intervention programme gets to the right persons.

Items to be distributed include seedlings of rice, maize, sorghum, fertilizers, pesticide, water pumping machines, sprayers and other farm implements.