Former Super Eagles player and Nigerian Football Ambassador, Daniel Amokachi, has been appointed as Special Assistant on Sports to President Muhammadu Buhari. “I am pleased to inform you that Muhammadu Buhari, President of the Federal Republic of Nigeria has approved your appointment as Special Assistant on Sports,” the appointment letter dated August 17, 2020, and…”
Yusuf
Sports 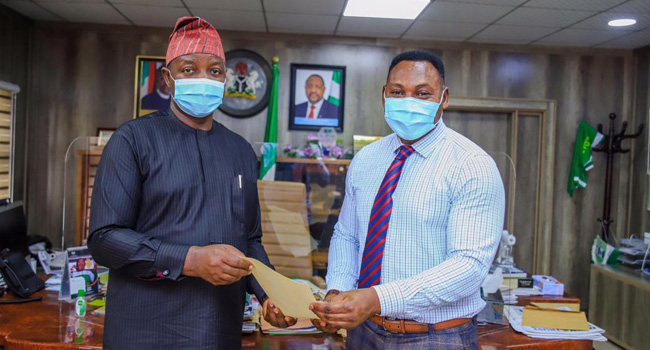 “I am pleased to inform you that Muhammadu Buhari, President of the Federal Republic of Nigeria has approved your appointment as Special Assistant on Sports,” the appointment letter dated August 17, 2020, and signed by the Secretary to the Government of the Federation Mr. Boss Mustapha, reads in part.

The appointment takes effect from August 11, 2020.

As special assistant on sports, Amokachi is expected to advise the President on all sports matters.

The former Everton of England forward was earlier in the year named Nigeria’s Football Ambassador.

Although a ceremonial role, as Ambassador, he is expected to mentor youngsters and promote the game at the grassroots.

Nicknamed “The Bull”, Amokachi began his career in Kaduna with Ranchers Bees Football Club of Kaduna, played for Club Brugge of Belgium, Besiktas of Turkey, Everton of England and Colorado Rapids.

He played in two World Cup finals, USA 1994 and France 1998. He was a member of Nigeria’s 1994 African Cup of Nations winning team and won the 2013 edition in South Africa as assistant to the late Coach Stephen Keshi.

Amockachi also won Gold with team Nigeria in the Football event of the Atlanta 1996 Olympics.

Since confirming his retirement from active football, the former Besiktas of Turkey player has also coached the U-23 National Team, served as assistant coach of the Super Eagles, and coached NPFL club side, Nasarrawa United.

Aussie Open: Federer Gets Tough Test As Djokovic Crashes Out