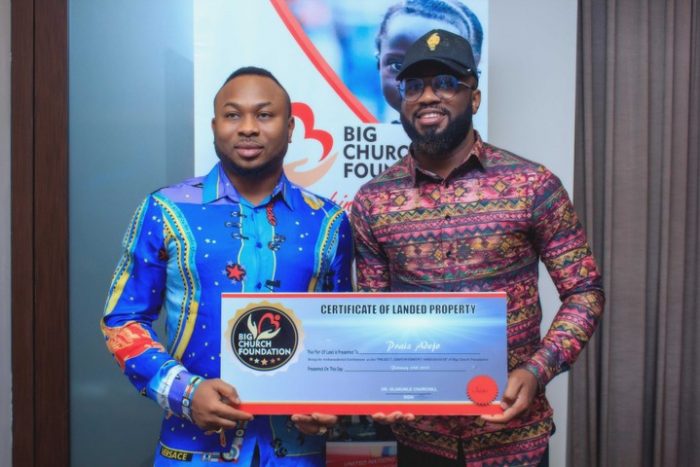 Praiz Adejo who is one of Nigeria’s award winning singer and MTN Ambassador has landed another contract as an Ambassador for the Big Church Foundation. The artist was given two plots of Land in Abuja metropolis, along airport road.

The Ambassador for Project and Empowerment of Big Church Foundation, Praiz Adejo was gifted the plots which was allegedly said to be worth 50million ‎Naira  one of his ambassadorial benefits. He was signed into the fast growing charity foundation in Africa owned by young Software and security specialist, Dr.Olakunle Churchill recently. The Foundation is set for their much anticipated Agriculture and mining projects which involves empowering 36, 000 Nigerians. The project which cuts across different states will be spearheaded by the R & B singer – Praiz.

The Chairman of the Foundation, Churchill congratulated his new Ambassador of 2017 project while reiterating his commitment in Charity campaigns and projects especially for the disabled, less privileged, widows, children as well as the sick irrespective of whose horse is gored.  Big Churchill Foundation is partnering with the Office of the First Lady Delta, Niger Delta Development Commission and Chigolden Aid Foundation for a two day “TAKE THE CHILD OF THE STREET CAMPAIGN”  in Warri on 30th and 31st of March. Just as it has been nominated for 2017 Northern Nigeria Peace Award on 31st of March in Abuja, following the foundation charity exploits at the crisis ravaged Southern Kaduna tagged – “The KADA River Massacre”