The policemen that took over Ekiti State Government House on Monday and allegedly fired teargas canisters at Governor Ayodele Fayose have been withdrawn. The smoke of the teargas had made Governor Fayose to slump and fainted for over five minutes before being resuscitated by party supporters. The governor also revealed that he was allegedly hit…”
Yusuf
News 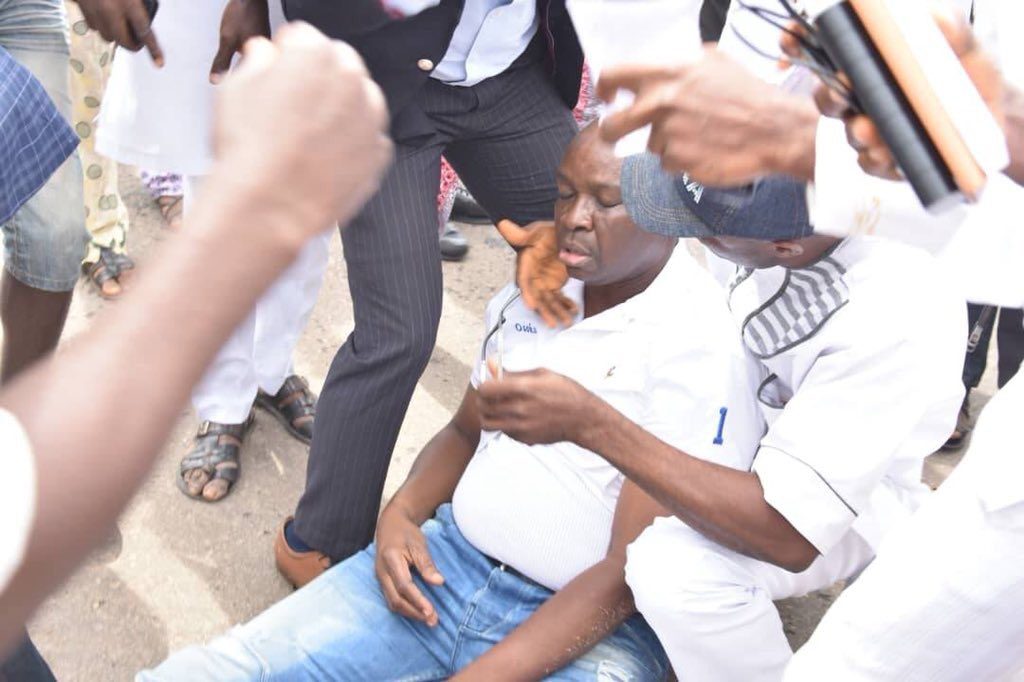 The policemen that took over Ekiti State Government House on Monday and allegedly fired teargas canisters at Governor Ayodele Fayose have been withdrawn.

The smoke of the teargas had made Governor Fayose to slump and fainted for over five minutes before being resuscitated by party supporters.

The governor also revealed that he was allegedly hit in the neck during an altercation with the policemen, where he sustained injury leading to his hospitalisation at the Government House Clinic.

The policemen, led by the Commissioner of Police in charge of MOPOL, Mr. Eche Eche, had blocked the road between Fajuyi Park and the Government House and prevented some members of the Peoples Democratic Party (PDP) from holding a rally.

The policemen also occupied the state pavilion, which had been the campaign base of the candidate of the PDP, Prof. Kolapo Olusola, and dispersed those massing in preparation for a victory rally for the party.

When journalists visited the entrance to the Government House, the policemen have left the place and the barricades mounted have been dismantled.

There were no restriction of human and vehicular movements as witnessed on Wednesday.

The Deputy Inspector General of Police (DIG), Operations, Mr. Habilal Joshak, also appeared on the state-owned television where he denied the insinuation that he ordered his men and officers to use teargas on the crowd.

“What I said was that those massing for the rally should be asked to leave because it is not good going by the mood of the state now to hold rally or street procession. I didn’t say they should use force.

“This is an election and electioneering is a civil matter anywhere across the globe, so police as security agents can’t use force on the people.

“But I want to assure the good people of Ekiti State that such mistake will never repeat itself,” Joshak stated.

The DIG Operations had said that no party will be allowed to hold any political rally not approved by the police until the election is held.

“But we are not going to allow any unauthorised rally that can trigger violence in the state. You can see that the state is tensed up.

“As law enforcement agents, we must be proactive and take actions that can prevent crisis rather than trying to quell it after it might have broken out,” he had said.

Meanwhile, the Special Assistant to Governor Fayose on Public Communications, Lere Olayinka, has said the governor has been discharged from the hospital and now stabilising.

“The governor is now better and stabilising fast. He is out of the hospital and I believe he will get well soon,” he said.

Insecurity: NYSC Members Should Be Allowed To Serve In Their States, Afenifere Urges FG