A suicide note in which Peru’s Alan Garcia denied corruption charges against him set the backdrop Friday for the ex-president’s funeral, two days after he put a gun to his head and pulled the trigger as police arrived to arrest him on bribery charges linked to the Odebrecht graft scandal. The sweeping affair, which has…”
Editor
News World News 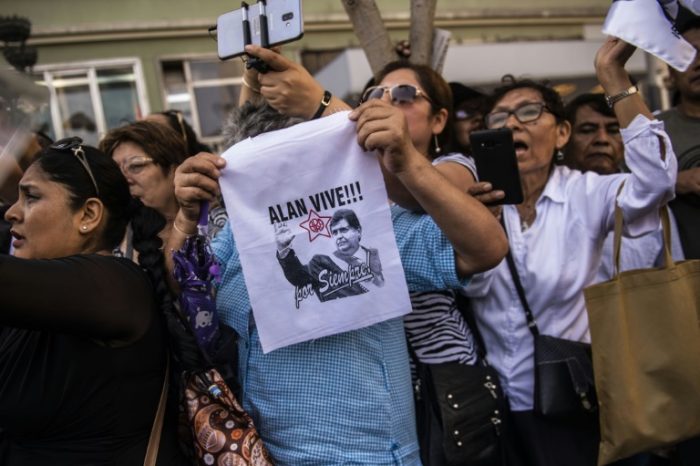 A suicide note in which Peru’s Alan Garcia denied corruption charges against him set the backdrop Friday for the ex-president’s funeral, two days after he put a gun to his head and pulled the trigger as police arrived to arrest him on bribery charges linked to the Odebrecht graft scandal.

The sweeping affair, which has tainted politicians across Latin America, swept up another Peruvian ex-president when a judge ordered 80 year-old Pedro Pablo Kuczynski jailed for up to three years on Odebrecht-related money laundering charges.

“I’ve seen others paraded in handcuffs and living a miserable existence, but Alan Garcia will not suffer such an injustice or circus,” the late ex-president, 69, wrote in a note to his six children. It was read out at his funeral by his sobbing daughter Luciana.

He had a long and controversial political career in which he seemed obsessed with his legacy.

“I leave to my children the dignity of my decisions, to my colleagues a signal of pride and my body as a sign of my contempt for my opponents because I already fulfilled the mission given to me,” wrote Garcia.

He accused authorities of using corruption investigations as a tool for “humiliation, harassment and not to find truths,” then wrote dramatically: “Others sell themselves, but not me.”

In his suicide note, Garcia “victimizes himself, blames opponents for his situation, then sacrifices himself for the sake of his party,” historian Juan Luis Orrego opined on RPP radio.

Thousands of people gathered at the headquarters of Garcia’s social democratic APRA party in Lima to bid their leader a final farewell.

“Alan Garcia performed an act of dignity and did not allow that persecution disguised as a legal inquiry to mock him — that is the main gift he gave to the party,” said Congressman Mauricio Mulder, one of his closest collaborators.

The ex-president’s remains were then cremated in a private ceremony.

Early Wednesday, police arrived at Garcia’s home in the upmarket Miraflores neighborhood of Lima with an arrest warrant to take him into custody for a preliminary period of 10 days, which would have given authorities time to gather evidence and prevent him from fleeing.

Last year, Garcia fled to the Uruguayan embassy after a court ordered him not to leave the country for 18 months. He stayed at the mission for 16 days, but Uruguay denied his application for asylum.

Garcia was suspected of having taken bribes from Brazilian construction giant Odebrecht in return for large-scale public works contracts.

Prosecutors allege that Garcia and 21 other officials conspired to enable Dutch company ATM Terminals to win a 2011 concession to operate a terminal at the port of Callao, near Lima.

Peruvian press reports also claim Garcia received a $100,000 payment from an illicit Odebrecht fund for giving a speech to Brazilian business leaders in Sao Paulo in May 2012.