The Governor of Osun, Ogbeni Rauf Aregbesola has averred that the opposition Peoples Democratic Party (PDP) is bereft of ideas on how to run government, describing the party as clueless. Aregbesola said the PDP lacks the credibility and morality to criticize his administration saying that the party does not have the required knowledge to run…”
Yusuf
featured hero Osun 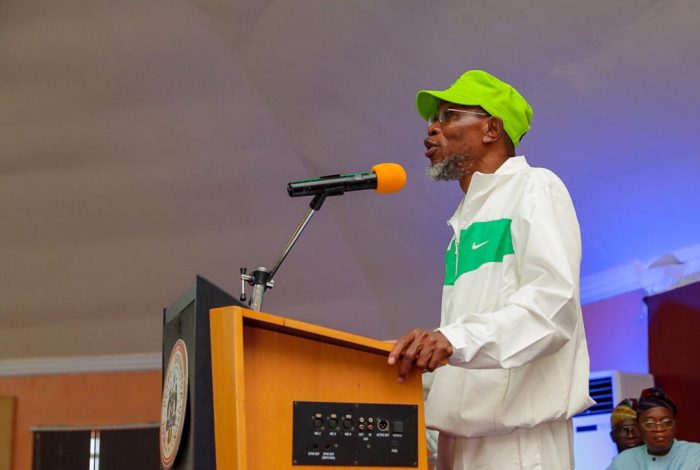 The Governor of Osun, Ogbeni Rauf Aregbesola has averred that the opposition Peoples Democratic Party (PDP) is bereft of ideas on how to run government, describing the party as clueless.

Aregbesola said the PDP lacks the credibility and morality to criticize his administration saying that the party does not have the required knowledge to run a successful government like his.

He spoke on Thursday in Osogbo at the launching of the ‘State Of Osun Development Plan (2019-2028)’ put together by the Ministry of Economic Planning, Budget and Development.

According to the Governor, it amount to gross irresponsibility for the PDP to said his administration has failed, arguing that all credible international and national organizations and individuals have lauded his government and rated Osun high in term of development.

Aregbesola said a party like the PDP which thinks good governance is all about payment of salaries alone to the neglect of other sectors do not have the required knowledge to be in power.

Aregbesola said: “The way some people especially the PDP thinks is very embarrassing. Do they have the moral standing to say our government is a failed one? No. They simply do not have the clue on how to run government.

“To them, the best way to run a good government is the payment of salaries alone and neglects the other sectors of the society which are equally important in the development of the entire state as a whole.

“And some people are sitting down somewhere saying our administration is a failed one, I wonder why they reason in that manner. In terms of good governance, Osun ranks among the best in Nigeria”, Aregbesola said

He  said for Osun to be rated as the state with least rate of poverty and unemployment among others by the National Bureau of Statistics, whoever calls the state a failed state must bury his or her head in shame.

The governor maintained that Osun can favourably compete with the seven states which have the most robust economy in the country, adding that the state has improved tremendously in the last eight years of the outgoing administration.

The Governor described the plan as a guide and blue print to the rapid development of Osun, noting that it has always been his determination to have a development plan for Osun like other leading states of the federation.

He commended all stakeholders who have been involved in putting together the development plan from the onset, expressing his optimism that Osun will be better with the document in the hands of the incoming government of the Governor-elect, Mr Gboyega Oyetola.

In a goodwill message, Dr Sade Taiwo of Nigerian Institute of Social and Economic Research, Osun is on the right track to development, having been a participant from the beginning, with  a good understanding of the Osun development plan.

According to Taiwo, Osun has done it the way it should be done and the results will naturally come in a matter of time.

Also speaking, the Chairman, Osun Civil Society Coalition, Comrade Waheed Lawal who participated in drawing up the development plan, lauded Aregbesola for providing all resources needed for the plan and for the vision.

Lawal said the governor has scored many firsts during his administration, describing the Osun development plan as another first for the governor because it is the first in the history of the state.

According Lawal, “Osun will never forget Aregbesola for this, it is in fact the first of its kind in Osun and we are proud of this. I am happy to have participated in drawing up this plan, I can beat my chest and tell my children that the future of our dear state is bright.”

In a welcome address, Commissioner for Economic Planning, Budget and Development, Dr Olalekan Yinusa said the success of any society is hinged on the strength of the economy.

Yinusa pointed out that to have a strong economy there must be adequate institutional reform and planning in line with international best practices which will develop tools to guide governments expenditure.

Man Dupes Pastor, One Other of N385, 000 On School Of Nursing Admission

…We Want To Shine The Light On Women- ELOY Awards Orgnizer