California parents David and Louise Turpin, who abused their 13 children and kept them in isolation have been arrested and charged to court after one of their children escaped and called 911 early on January 14. According to reports from PEOPLE, the children aged between 2-29 years.  The audio of the teen’s 911 call was released…”
Editor
News World News 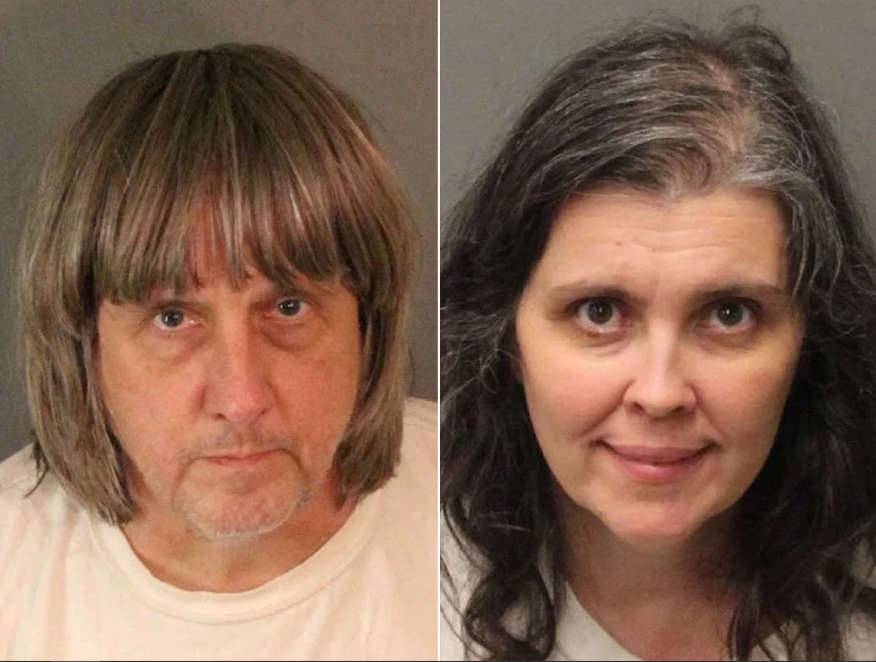 California parents David and Louise Turpin, who abused their 13 children and kept them in isolation have been arrested and charged to court after one of their children escaped and called 911 early on January 14.

According to reports from PEOPLE, the children aged between 2-29 years.  The audio of the teen’s 911 call was released for the first time on Wednesday morning, June 20, at a preliminary court hearing for the Turpin parents in Riverside County, California. In court, it was revealed that the children were allowed to bath only once a year and weren’t allowed to go to school. They were also starved, chained, and made to live in filth.

In the small voice of a much younger child, reading from a piece of paper with her family’s address on it, the 17-year-old daughter of David and Louise Turpin called 911 early on Jan. 14 to report that they were allegedly abusing and chaining up their children.

David and Louise’s have been arrest on numerous charges of abuse, false imprisonment and torture, among other counts.

“I live in a family of 15 people and our parents are abusive,” the girl told the 911 operator while she was outside her family’s suburban Perris home, according to audio of the call that was played in court.

Louise was seen crying as she listened to it on Wednesday.

“They are abusive,” the girl said. “And two of my sisters are chained up.”

The girl’s sisters and one of her brothers were all chained to their beds, she said on the call, answering the dispatcher’s questions.

“Our parents don’t let us move out,” the girl said. “Some of us have asked for jobs and they said that would never happen.”

Though she spoke in detail about life behind closed-doors in the Turpin family, the girl seemed at a loss to answer basic questions about the wider world, such as where she lived. Instead she read her address from the piece of paper she carried with her.

“I haven’t been out. I don’t go out much,” the girl said. “I don’t know anything about the streets or anything.”

“I don’t know what medication is,” she said at one point, noting, “We don’t really do schools. I haven’t finished first grade and I am 17.”

The teen said the siblings lived in essential isolation, visited only by their grandparents. “The rest of the family, we don’t know them,” she said.

Of the alleged abuse they suffered, she told 911 her parents “only chain us up if we do something we are not supposed to. I have never done anything I am not supposed to.”

David and Louise Turpin each face 12 counts of torture as well as seven counts of abuse of a dependent adult, nine counts of child abuse or neglect and 12 counts of false imprisonment.

David is additionally accused of a lewd act against a child and perjury, for allegedly lying about his children’s schooling. Louise has been charged with felony assault.

They remain in custody in lieu of $12 million bail each after pleading not guilty to all of their charges. One of their attorneys has publicly noted that both are presumed innocent until convicted. Beyond that, the defense has not commented specifically on the case to PEOPLE.

The Turpins were arrested on Jan. 14 not long after their 17-year-old daughter escaped their home and used a disconnected cell phone to call 911 to report the alleged abuse and captivity, authorities have said.

When responding officers entered their Perris home, they allegedly found a horrendous scene of malnutrition and squalor, with some of the children shackled to their beds.

“We live in filth,” the Turpins’ 17-year-old daughter told 911, according to audio played in court on Wednesday. “Sometimes I wake up and can’t breathe because of how dirty the house is.”

Prosecutors allege the Turpins denied their kids food and only allowed them to take one shower a year. Most of the siblings, who were ages 2 to 29 at the time of their parents’ arrest, were unfamiliar with how to use a toothbrush.

“They [the 13 children] lack a basic knowledge of life,” Riverside County District Attorney Michael Hestrin told reporters in January. “Many of the children didn’t know what a police officer was.”

The girl told 911 in January she could not remember the last time she bathed herself but that it was “almost a year ago,” according to the call audio played Wednesday.

“Sometimes I feel so dirty I wash my face and I wash my hair in the sink,” she said.

Investigators who spoke with the teen later on Jan. 14 noted her “unwashed” appearance and behavior befitting “someone a lot younger than 17,” according to Riverside County Sheriff’s Deputy Manuel Campos, who testified at Wednesday’s hearing.

Dressed in a pink hat, blue jeans and white shoes, the girl “had an odor emitting from her body of someone who didn’t bathe regularly,” Campos said.

“Her speech seemed to be a lot younger — the speech of a child,” he said. “She did have trouble pronouncing words [and] referred to her parents as mother and father. She said she was taught to address them that way because it was more like the Bible days.”

Leaving her family’s home to summon authorities was terrifying, she said, according to Campos. It was “one of the scariest things she had ever done.”

Elections For Mayors And City Council Members Holds In Isreal