Governor of Osun, Mr Gboyega Oyetola has restated the commitment of his administration to universal health coverage for all and sundry most especially the downtrodden. The Governor made this statement at the National Roll-Out Of Enrolment of Clients for Basic Health Care Provision Fund (BHCPF) held at the Primary Health Care Centre, Isale Agbara,…”
Yusuf
featured Health Osun 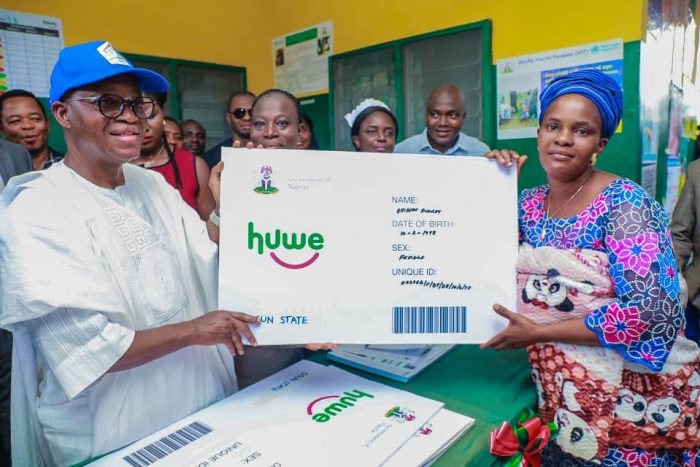 Governor of Osun, Mr Gboyega Oyetola has restated the commitment of his administration to universal health coverage for all and sundry most especially the downtrodden.

The Governor made this statement at the National Roll-Out Of Enrolment of Clients for Basic Health Care Provision Fund (BHCPF) held at the Primary Health Care Centre, Isale Agbara, Osogbo on Friday.

Mr. Oyetola who commended Federal Government for coming up with the Basic Health Care Provision Fund just within six months after facilitating the Save One Million Lives World Bank Grants for the benefit of states of the federation.

Governor Oyetola said his administration would ensure full implementation of all the components of the Huwe which is another name for BHCPF programmes.

” We shall ensure effective implementation of the programme which include Antenatal care, child delivery, free immunization, treatment of malaria, measles, pneumonia, diabetes, and free family planning among others,” he said.

The Governor appealed to the people of the state to make good use of the Federal and State intervention by taking care of their health to enable them contribute to creating wealth and development in the nation.

In his address at the event, the Minister of Health, Prof. Isaac Adewole, said Huwe meaning ‘ Giving Life’ would facilitate Basic Health Care Provision Fund which he referred to as a dedicated mechanism that would create additional fiscal space for primary health care services as conditions for Universal Health Coverage( UHC).

Prof. Adewole who commended Governor Gboyega Oyetola for his commitment to the qualitative health care of the people of Osun, added that ” An inter- fiscal transfer of resources from the Huwe ‘Giving Life” Account at the Central Bank Of Nigeria through the accounts of the Federal and State agencies would be made directly to enable them deliver health care .

” I am convinced that with the flag off , Huwe will turn the tide around on the basis on which it was developed,” He said.

According to him, ” A robust governance and accountability structure underpinned by a data and performance Management framework for continuous evaluation would be set in place for the sustainability of the programme.

He said ,” Huwe would help reverse the poor health indices in the country and maternal mortality will be a thing of the past.

” Our children would no longer have to die as a result of vaccines preventable disease or other common ailments,” Adewole said.

The Minister noted that the role of the Global Facilities Financing of the World Bank , and the Bill and Melinda gate foundation that committed $20 Million and $2Million to the programme at the early stages was commendable.

Mr. Adewole thanked the development partners which include DFID, USAID, CIDA , WHO, and the Norwegian government who have supported the Federal Government in shaping the Universal Health Coverage (UHC) agenda.

In his remarks at the programme, the Executive Director, National Primary Health Care Development Agency (NPHCDA), Dr. Faisal Shuaib who was represented by Dr Adefunke Adesope , stressed that Osun happened to be the first state to launch the Roll-Out of Enrollment of Citizens for Basic Health Care Provision Fund (BHCPF) in the country.

Shuaib said Osun happened to meet up with the criteria which was set up by the Federal Ministry of Health as a precondition where all the 36 states and the Federal Capital Territory competed .

” Three States came first with Osun happened to be the lead among Abia and Niger,” he said

Dr. Shuaib who enjoined the people of Osun to support Governor Oyetola in his quest at providing universal health care to all and sundry, stated that about 17 states are ready to benefit from the programme.

N147million Subvention Given to LAUTECH in 2months Despite Audit, Oyo Commissioner Says