The National Chairman of the All Progressive Congress, Chief John Odigwe Oyegun, the Governor of Borno, Kashim Shetima, his Kebbi State counterpart, Bagudu, revved the campaign of the All Progressives Congress as the party rounded up its campaign tour of the West Senatorial zone ahead of Saturday by-election. Oyegun said since the APC won the 2014 governorship…”
Editor
featured Osun 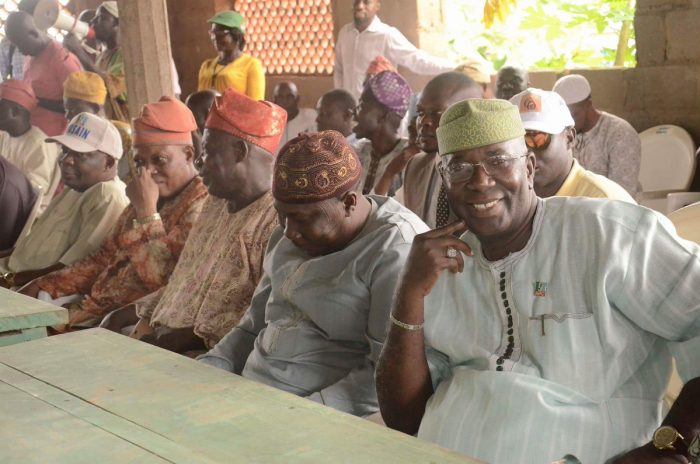 Oyegun said since the APC won the 2014 governorship election in Osun, the party has not lost any major election in Nigeria.

Oyegun, who saluted the courage of the Governor, Ogbeni Rauf Aregbesola, said Osun is a major ground from where the APC launched itself to the federal level two years ago.

Oyegun said this at the mega rally and grand finale of APC campaign in Iwo.

According to the National Chairman of the party, Osun is strategic to the party in all ramification tasking the people of the senatorial district to make sure they vote the party candidate, Mudashiru Husain,  overwhelmingly on Saturday.

Oyegun said as importance Osun is so also the Senatorial candidate of the party is also very important to the state and the party.

He told the gathering that they should all come out en masse to vote for Husain as the election is very crucial to the party and the state.

He described the candidate as once a ranking member of the upper chamber, saying he will not occupy the back bench in the hallowed chamber if elected.

“I want you to know how important this election is to us. That is why you can see me and all party apparatchik here today.

“As challenging as the situation is, the Borno Governor Kashim Shettima, came here to support his us all.

“We need Mudashiru Husain in the Senate. He is a ranking man.  He won’t sit at the back when he gets there. Osun will be represented well.

“Since the Governorship Election victory here in Osun two years ago we have not lost a major election.

“This is why Osun is strategic to APC as an election is also crucial to us,” Oyegun said.

He commended Aregbesola for his courage in facing the hard time, which he said is not peculiar to one state.

He reiterated the commitment of the Federal Government in finding a solution to the social, political and economic problem the nation is undergoing, adding that the hard economic situation was not created by APC in the first place.

He continued: “The Federal Government is working day and night to solve the problem. APC will not disappoint Nigeria.

“I want you all to troop out and vote for our candidate. I hope in the next four days I will be able to tell President Muhammad Buhari that Aregbesola has delivered once again and Husain is back in the Senate.”

In his remarks, the Governor Shettima, who handed over the flag of the party to the Nation Chairman, appealed to the people of the senatorial district to respect Aregbesola by voting overwhelmingly to for the party.

Shettima said the Aregbesola has performed very well to deserve being honoured by voting for his candidate.

Also in his own remarks, the Governor of Kebbi State, Abdullahi Atiku Bagudu, said the performance of the Aregbesola is enough to win any election in the state.

Bagudu urged electorate in the senatorial district to come out on Saturday and vote massively for Husain.