By Abiodun Komolafe Conscious of the State of Osun’s leading roles in the enhancement of livelihoods and a life of dignity among Nigerians, the United Nations Children’s Fund (UNICEF) recently led Lagos, Delta, Zamfara and twelve other states to Osun to understudy how its policies and programmes, anchored on the administration’s Six-point Integral Action Plan, had positive impact on the lives of its residents. To start with, Osun’s hitherto sordid as a…”
Editor
featured hero Op-Ed Osun 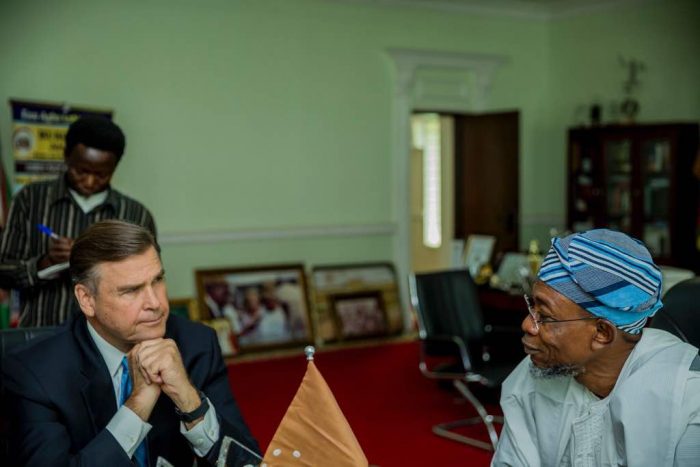 Conscious of the State of Osun’s leading roles in the enhancement of livelihoods and a life of dignity among Nigerians, the United Nations Children’s Fund (UNICEF) recently led Lagos, Delta, Zamfara and twelve other states to Osun to understudy how its policies and programmes, anchored on the administration’s Six-point Integral Action Plan, had positive impact on the lives of its residents.

To start with, Osun’s hitherto sordid as a result of the ineptitude of its past leaders and elders who preferred failure to bestowing a legacy worthy of remembrance on their words and deeds is no longer news. Also unhelpful was the global oil glut and the protracted currency collapse, which have forced many countries around the world to adopt painstaking measures to fill gaps in their public finances. That Governor Rauf Aregbesola was able to force a hole in a stone, in spite of its hardness, is a feat that must be commended by all.

In Osun, there are varieties of activities on Social Protection that have galvanised and driven the administration more rigorously. Prominent among them is Osun Youth Empowerment Scheme

(OYES), which is a radical, robust, market-development and character-building programme put in place by the government to tackle the annoying scourge of unemployment among our youths. Apolitical in concept and all-embracing in process, the Omoluabi ethos-inclined scheme succeeded in mopping up more than 40,000 youths off our streets for productive engagement.

Next is the Osun School Feeding and Health Programme, O’MEAL. Formerly known as Home Grown School Feeding and Health Programme (HGSFP), OMEAL’s capacity has been strengthened under this administration to accommodate more beneficiaries. And, as at December 2016, the state government has spent more than N10billion to provide over-200 million plates of highly nutritious meals to pupils in its Elementary Schools across the state.

One major achievement of the scheme is the eradication of avoidable diseases among the school pupils. For instance, before this administration came to power, it was discovered that eight out of every 10 students had scurvy, but that has disappeared with the advent of OMEAL.  Also, the scheme has never recorded any incidence of contamination or food poisoning since inception. Added to this is the reduction in unemployment through the absorption and empowerment of over 3,000 community caterers.

Followed is the ‘Agba Osun’, the Elderly Persons Welfare Scheme’, which was proactively designed to cater for the needs of the elderly, as well as enhance the socio-economic status of the critically vulnerable senior citizens in the state.

Through Osun Destitute Rehabilitation Programme (O’REHAB), mentally-challenged individuals are identified, rehabilitated and reunited with their families and the society. Under the programme, the already rehabilitated mentally-challenged persons are taken through skills acquisition training in addition to moral and financial support, all geared towards ensuring proper reintegration into the society. O’REHAB also undertakes public enlightenment campaigns on the causes and treatment of mental disorder.

State of Osun’s Free Medical Programme is also worthy of mention. Government’s intervention in this sector is geared towards alleviating the burden of ill-health as well as reducing the indirect costs of diseases and disabilities such as lost years in income, care of family members and lower productivity, to mention but a few.

What of Osun Ambulance Services (O’AMBULANCE)? With one ambulance in each of the then 30 Local Government Areas, plus one Administrative Office, and 19 sophisticated ambulance buses in strategic locations in the state at inception, it is sure that those with the faith of Thomas concerning government’s commitment to reducing accident rates and saving lives in the state will have a rethink.

Here comes Osun Microcredit Agency, an agency established to aid the economic expansion of the state through the provision and disbursement of credit facilities, primarily, to cooperative groups of artisans, traders and medium-scale agro-allied enterprises, amongst others. For instance, more than N3 billion has so far been injected into the state’s economy through its activities, even as very low interest and interest-free loans have been made available, compared with interventions before its establishment. This intervention has also led to better utilisation of borrowed funds among the beneficiaries and an improvement in the capital of the participating Micro-Finance Banks (MFBs).

Also worthy of mention are ‘Walk-to-live’, an embodiment of team work, mental alertness and physical exercise that richly adds value to the health of the citizens; and Osun Calisthenics Programme which has been preparing Osun students for the future through ”a variety of movements often performed rhythmically and usually conducted in concerts with stretches to depict symbols.” It is interesting to note that, apart from the introduction of Calisthenics into Osun schools’ curriculum, other states like Lagos have identified with this laudable initiative.

Lest I forget, one of the important contributions by the state government to the Agriculture sector, which is now famously described as the prospective backbone of Nigeria’s economy, is the establishment of Osun Rural Access and Mobility Project (O’RAMP). It is an agency which sees to the construction of rural access roads in our farm settlements. The overall intention of this initiative is to enhance massive production of food crops in the state.

The O’UNIFORM, a regime of uniform identity for all the students in the state’s public schools, has also done a lot in eradicating discriminations among the students, in addition to maximizing economies of scale on the part of the local suppliers of the uniforms to the buyers. Other advantages abound!

So far, so commendable! But beyond eloquent comments that have accompanied these interventions, where lies the hope for continuity and sustainability, taking into consideration that the lifespan of this administration expires in about five hundred days? Well, one sure way of ensuring that the message doesn’t die with the messenger is by facilitating the Social Protection Bill into law. Others lie in documenting the state’s development plans, constant monitoring by reputable organizations like UNICEF as well as encouraging other states to emulate Osun’s giant strides in Social Protection initiatives. Over and above all, since globalization has made competition very hard; and, with the economy painfully menstruating as a result of the global economic miasma, there’s no better time to proactively respond to vulnerabilities than now.