Government of Osun has registered over 10,000 artisanal miners as part of efforts to unlocking its potential in mining and other sectors of the economy. Governor Gboyega Oyetola’s Chief Press Secretary , Ismail Omipidan disclosed this on Friday while speaking on the government’s developmental programmes as a guest on ‘Frank Talk’ programme of the Rave…”
Yusuf
featured hero Osun 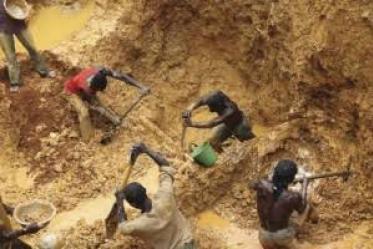 Government of Osun has registered over 10,000 artisanal miners as part of efforts to unlocking its potential in mining and other sectors of the economy.

Governor Gboyega Oyetola’s Chief Press Secretary , Ismail Omipidan disclosed this on Friday while speaking on the government’s developmental programmes as a guest on ‘Frank Talk’ programme of the Rave FM, Osogbo.

According to him, the registration exercise would further assist the state in the collation of data of all the artisanal miners who are currently engaging in mining activities in the state.

According to him, the state was open to investment and determined to partner investors to advance the economy of the state.

He added that the administration of Governor Oyetola was committed to diversifying the economy by judiciously and adequately tapping the socio-economic potential embedded in the mining, agriculture, tourism and ICT for the general benefit of the people of the state.

He maintained that the administration would spare no efforts at maximising the opportunities in the various sectors, as part of efforts to build a virile, competitive and healthy economy for the state.

The Governor’s Chief Press Secretary, who described Osun as an investment destination said the administration of Governor Oyetola would leave no stone unturned to turn the state to investment hub of the Southwest in particular and Nigeria in general.

Omipidan said the administration would continue to leverage on the resources available to the state to achieve the desired results.

He disclosed that a Canada-based mining company had already paid the State a sign-on fee to the tune of 100 million naira, adding that the government had demonstrated high sense of seriousness to revamp the mining sector.

“We are serious about diversifying the economy. Today, we can see a Canadian firm that is ready and showing interest in partnering the state to promote mining sector. It shows that the administration of Governor Oyetola is the one that wants prosperity for all.

“We are working assiduously to regulate the activities of the artisanal miners. As I speak to you, over 10,000 of them have been registered. To us, this exercise will help to know who and who are really into mining.

“The government is also working on the need to procure and lease mining tools to the artisanal miners as part of effort to support them,” he said.

Speaking on the prospects of the mining sector in the state, Omipidan said Osun is one of the few states in Nigeria with huge deposits of mineral resources capable of developing the economic profile of the state.

He called on the youths to key into government’s policies designed to rejuvenate the mining sector.

In her contributions on the programme, an Osun based mining expert, Mrs. Jumoke Lawoyin, applauded the administration of Governor Oyetola for the commitment displayed to diversify the economy.

She acknowledged the moves taken by the state government to restructure the mining sector, describing the initiative as a ‘noble action’ capable of unlocking the economic potential in the sec