The Coordinator, Osun All Progressives Youth Forum (OAPYF) Comrade Olateju Olorungbebe Adunni has affirmed that the forum will bridge the gap between political appointees and warring youths within the party. Comrade Adunni gave the affirmation in Ilesa at a town hall meeting organized by the forum and aimed at resolving perceived differences within the party…”
Yusuf
Osun Politics 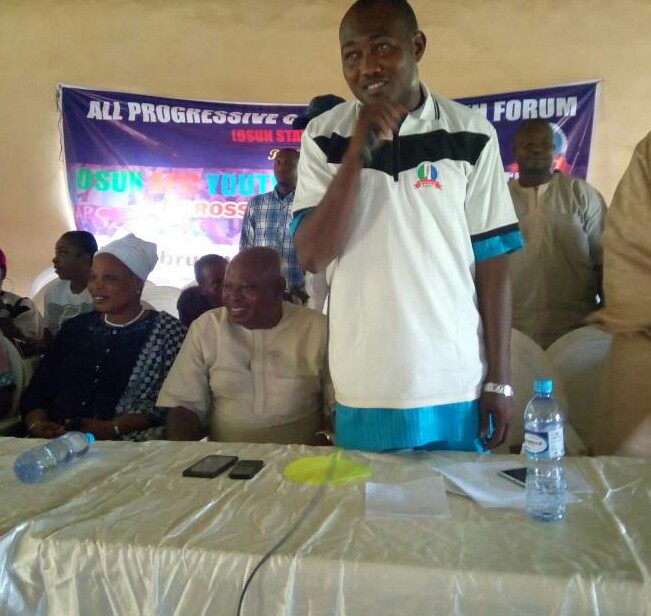 The Coordinator, Osun All Progressives Youth Forum (OAPYF) Comrade Olateju Olorungbebe Adunni has affirmed that the forum will bridge the gap between political appointees and warring youths within the party.

Adunni who said the party is ready to listen to all grievances from the youths also assured the party that measures have been put in place to make the programme a huge success.

Adunni explained that necessary mechanisms are in place to make the programme a huge success and bring members to an amicable stance.

According to him, “this town hall meeting is an opportunity for all the Osun APC Youths to interact intimately with political appointees and party leaders elected on the platform of APC in our locality, to assemble and discuss our basic interests”.

“We are also exploring the interactions to proffer solution to internal tensions threatening our cohesion and bond irrespective of political interests, and swing into actions to solidify our political family the more as a vibrant segment of the party”.

“It is pertinent for us to take the present challenges confronting our party as opportunity to make a difference and work hard as good ambassadors of this party to sustain and promote the good will of Ogbeni Rauf Aregbesola”, he stressed.

He said that Governor knows that health is wealth and that is the reason why Aregbesola embarked on the Ilesa water project which he said has been abandoned since 1981.

According to him, “It is clear that the over seven years experience of dynamic leadership of APC in the state has exposed the corruption-ridden administration of opposition party in the past, hence, the need to prevent them from coming back to the saddle.

Hon. Owoeye urged the youths to be persistent in their resolve to take the present challenges confronting the party as opportunity to make a difference and work hard as good ambassadors of the party in other to sustain and promote the good will of Governor Aregbesola. Meanwhile, the Osun State Commissioner for Local Government and Chieftaincy Affairs, Hon. Kolapo Alimi in his remarks charged the youths to reintegrate the unstable members of the party.

Alimi urged the youths to visit their compounds and polling units before the election and give help to the needy so as to promote good governance as institutionalised by Aregbesola’s style of administration.

Corroborating Hon Alimi, the Commissioner for Science, Innovation and Technology, Hon. Remi Omowaiye appealed to the youths to let go of their grievances and embrace peace.

He thereafter urged all members of the party to work together as a team in the forthcoming election in the state.

Untold Story Of How Osun Diety Was ‘Sold’