Holds Rally In Osogbo By Ismaeel Uthman Civil Societies and human rights groups in the State of Osun have kicked against increment in the electricity tariff and fuel pump price, describing it as sheer wickedness, anti people and affront on common Nigerians. A mass protest held on Friday where members of the various pressure groups…”
Yusuf
featured hero Osun 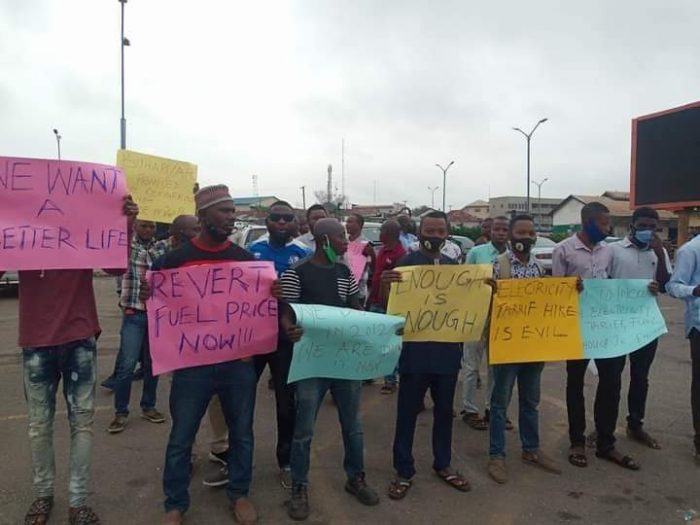 Civil Societies and human rights groups in the State of Osun have kicked against increment in the electricity tariff and fuel pump price, describing it as sheer wickedness, anti people and affront on common Nigerians.

A mass protest held on Friday where members of the various pressure groups registered their displeasure on the hike in fuel pump price and electricity tariff.

The Federal Government, through Pipeline Products Marketing Company had on Wednesday fixed the depot price for premium motor spirit at N151.56 per litre, while the Independent Petroleum Marketers Association Nigeria (IPMAN) might be selling between N158 – N162 per litre.

Chairman of Osun Civil Societies Coalition (OCSC), Comrade Waheed Lawal, in an interview with OSUN DEFENDER, said that people of conscience would not sit down and watch the Federal Government further unleashing hardship on the common people through the obnoxious increment.

Lawal maintained that human rights activists in the state would hold a protest today in Osogbo on the increment and would not hesitate to occupy the entire state further if the Federal Government does not rescind its decision.

According to him, “It is totally unacceptable for the Federal Government to continue taking common Nigerians for granted and taking us for fools.  It is an affront on common Nigerians to have increased electricity tariff when there is no regular power supply and proper billing system.

“The increment in the fuel pump price and electricity tariff is not only wicked, uncalled-for and condemnable, it an act gone too far to test the patience of Nigerians and we can no longer tolerate bad governance.

“The increment will further impoverish Nigerians; kill small- and medium-scale businesses and enterprises and the country’s economy if not reversed.

“The Federal Government is pretending not to know that the Coronavirus has rendered millions of Nigerians jobless and threatening means of livelihood of Nigerians. The government is not being considerate. We cannot continue to languish in silence. Our voice must be heard. Enough is enough”.

Residents of the State of Osun have expressed displeasure over the recent increment in electricity tariff and fuel pump price.

The residents, in different interviews with OSUN DEFENDER in Osogbo, Ilesa, Ife and Iwo yesterday said the increment in the electricity tariff amounted to injustice, as they were being made to pay more for the service they do not enjoy.

According to them, the Federal Government, which should be ashamed of the prevailing ‘epileptic power supply’, moribund refineries is insensitive to the plight of the people.

They stated that the hike in the fuel pump price would lead to inflation and increment in the prices of commodities, which will, in effect, add to their sufferings.

In his reaction, the Chairman, Committee for the Defence of Human Rights (CDHR), Osun Chapter, Comrade Wahab Akinrinade, stated that the new electricity tariff ‘is nothing but a regulated scam’, saying that it amounts to sheer exploitation of poor Nigerians.

Akinrinade, who spoke with the medium in Ilesa, said it is an affront on Nigerians for the FG to increase tariff while power supply is not regular amidst the spate of crazy bills and absence of metre for many houses.

He said the increment in the electricity tariff and fuel is another cruel policy that will contribute to the death of manufacturing companies and businesses in Nigeria.

Speaking with the medium, the Director of Programme, Centre for Sustained Dialogue, Comrade Waheed Saka, described the approval of the new electricity tariff and fuel pump price as the highest level of insensitivity from the Federal Government.

According to Saka, everything about the increment speaks volumes about how wicked Nigerian leaders have become.

He asked: “How on earth will anybody happily approve a new tariff regime and increment in fuel price at a time our people are still languishing in pains and pangs, triggered by lockdown due to COVID-19 pandemic?

“How on earth will successive leaders of our nation kowtow to the World Bank/International Monetary Fund directives without due diligence on the negative impact such directives will have on the citizen of this country?”

The human rights activist stated further that the electricity distribution companies, which failed in their responsibility to metre all households, despite widespread outcry of the people, now have presidential backing to further exploit the people through ‘the evil, insensitive and wicked’ tariff increment.

Comrade Rufus Oyatoro, who is the Chairman of Coalition Against Corrupt Leaders (CACOL), rejected the new tariff and fuel pump price, describing it as an enrichment of few individuals.

Oyatoro said: “The increase in electricity tariff and fuel pump price is not a welcome idea. There has not been improvement in electricity supply. I just see it as a way of enriching some people. We were deceived to believe that the power sector will be better with the private sector in place before it was sold. But reverse is the case.”